It is with a heavy heart that I report that my iBook SE “clamshell” — “Revision B” is what they call it here … appears to be irrevocably dead.

Mind you, this happened before I tried to install Panther.

The patient would not boot up as of last Wednesday. Attempts to boot it would result in a long long wait followed by a shell prompt sh-2.05a#.

Yesterday and this morning I was trying to install Panther and run the Disk Utilities. All attempts to format, partition, erase, or install anything are failing at this point. This looks very much to me like a hardware failure. That makes me sad.

This machine has served me well for 1999. It’s been a great machine with which to surf the net for one thing. It’s got an AirPort card in it, 320MB of RAM, and despite its clock speed of 366Mhz is quite nice to work on, particularly writing and blogging. I can’t tell you how many venues I’ve worked on it in — but it’s been very steadfast. Check out some of the pictures from my L.A. trip in February. It’s been cross-country several times. It’s been to client meetings and cafes, on trains and planes, in cars for wardriving.

I think I could have seen this coming. For several months now it’s had no, and I mean NO, battery life. Unplugging it from power put it immediately to sleep, or worse, shut it down entirely. I think that happened enough times that I must have introduced garbage onto the 6GB hard drive.

Unfortunately, it’s now a supremely cute paperweight. It needs a new hard drive and battery. And the form factor would not make a good Macquarium

On some searching, looks like replacing the hard drive is painful, It looks like I can get the hard drive upgraded to 30GB for $249 with MCE Technologies. Additionally, an iBook battery would cost me $139. So minus shipping, we’re at $388 to get the iBook back to normal.

It’s at this point that I will point out that the new lowest end iBook may be a better deal.

Clock speed on that new machine is 800Mhz (double ‘Clammy’); comes with a 30GB HD (same as what I would get by upgrading, 5 times as much as Clammy); Has a 12 inch screen (same as Clammy). It also has things that Clammy has no hope of ever having: Firewire and a DVD drive. It starts at $1100. I can’t tell at this point if it I could move my existing RAM upgrade into this machine. I’m also not sure my old (non 802.11g/Extreme) AirPort card would fit into it properly.

I’ll mull it over.

I feel like Strong Bad when he exclaims UNDELETED! after his trusty old Tandy blew up. Eventually, “For behold — the 386, a spectacle of graphics and sound!”. 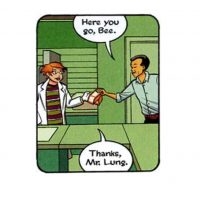