So Wednesday night, while Leah, Dev and Tony were at music lessons, I was here with Ali and Ty. My idea was to go explore the stuff around here that the kids had not seen. The pond, the fields, the basketball court.

The kids, eagerly accepted this idea. This could even be fun!

Al and Ty are close in age — 12 and 14. The dynamic changes without their older and younger brothers. Kind of fun. They’re both playful and teenagery in a way that T (10) and D (16) are not.

Anyway, we had a blast exploring the catch-and-release fishing pond. Not that we fished or went in, but we walked along the bank. Both of them walked over a narrow set of rocks at the edge. This is a set of rocks that I would think it would take a Cirque du Soleil acrobat to walk across. Ty was the first across and went for it before even asking me if it would be okay. Water on both sides — algae-filled cold water — I know that *I* would not go across the darn thing. Ali started to go across, then was being goaded into it by Ty, so she didn’t go for it.

Then we went further in, in search of the loudly croaking frogs we heard. The frogs, intimidated by the sound of exploring teens (technically Ty is not a teenager, but he’s close), shut up and we did not see any frogs. I kicked myself a little for not bringing a flashlight, as it was getting duskier by the second.

Ty calls out to me “hey can I go get this softball I see” — when Ty asks permission that must mean it’s hard to do or possibly dangerous. My stepfatherly reply was “If you can get it without getting wet and not hurting yourself you can do it” — so he went for it. Meanwhile Ali retreated back to the rock line. I noticed this as I was trying to get further into the thick brush. So I retreated a bit as well, and what did I see but Al going across the rocks. Seems like she needed the _lack_ of an audience to go for it. Fascinating.

I’m reminded of the scene in _The Killing Fields_ where the Malkovich character is trying to develop a fake passport photo for Dith Pran so he won’t have to go into the now Khmer Rouge-controlled Cambodia. He knows a life is at stake and he’s trying to develop this film with some jury-rigged chemicals and another guy. After two mistakes where the image blows out he asks the other guy to just get out and to let him do it himself.

With three brothers, Alejandra I think feels that way sometimes.

Anyway, eventually Ty found the old softball, which Al wanted no part of whatsoever because “who knows what was on it — so GROSS.” We continued to walk. Both of them wanting to walk on whatever high, narrow ledge they could find – walls, fences, rocks, whatever. It’s really inspiring to see them want to use these amazing tools — their physicality — that they have. Makes me think, hey, I need to get in better shape to keep up with them!

Fast forward pass the slides, swings, basketball-with-a-found-softball, watching some grown men play their softball game quite well. Al, who plays softball, remarked that these paunchy guys were pretty good. Indeed they were, 30 and 40-something guys playing slow pitch softball. I’m gonna have to look into that. Though I don’t really care for baseball or softball. I’m definitely jonesing for some racquetball.

Any readers out there in Simi Valley and wh0 play Racquetball? Give me a note.

So eventually we’re rushing to get some drinks, as we’re tired and flushed from all this activity. We went up to the local Ralph’s — maybe a mile away total. Anyway, Al gets a Diet Dr. Pepper, Ty get a Sobe, and I got a Mountain Dew. We’re waiting in line and the guy ahead of us in line — a thin 40_50-something thin fellow with a well-trimmed beard — he turns around and sees us, breathing hard (yes, all of us were breathing hard, not just me, the paunchy 30-something guy!) and says to Ty “You look just like your dad!” — and Alex, Tyler and I all look at each other and give out the biggest giggle ever. We can’t stop giggling and looking at each other and the dude says “you guys are a group, right?” — and I do eventually correct him, gently offering that “Well, I’m a stepdad” — and the guy winces minutely and says “Well that’s cool isn’t it that you look like each other yeah?” — I admit that yes it is.

The fellow in front of us tried to enlist the woman in front of _him_ in line to corroborate that Ty and I favor each other. She was a bit hesitant, and makes off with her groceries before really committing to the idea.

It was a good night on Wednesday.

Joe Crawford posted this 17 years ago.
What else did he post in April 2005?
The Date

Must be the full beards that makes the resemblance. I know I get that all the time when people see me and Homer together.

Must be the full beards that makes the resemblance. I know I get that all the time when people see me and Homer together. 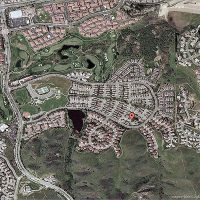 The Neighborhood
Children’s Drawings of Darfur