1982. I was attending school at Christ The King Church in Gretna, Louisiana. My nickname was “Crawdaddy” among the other kids. If you live in Louisiana and your last name is Crawford, you’re pretty much gonna get called Crawdad, Crawfish, or Crawdaddy. These words are what they call Crayfish.

Gretna is just outside Louisiana, just on the other side of the Mississippi River. Flat, green. Canals all around. When I have read more about how New Orleans works, and how swampy it was, and how tenuous a city it is, I’m really impressed. I mean, they can’t bury their dead in cemeteries there, they have to have above-ground mauseleums — that’s how high the water table is. It’s an alien, French/Not-Quite-French place.

I remember going back in 2000, I spoke on the topic of web accessibility at CNet Builder Live. I had a great time returning to the city. I listened to Jazz at Preservation Hall in the French Quarter. I hung out with Kynn, ate Red Beans & Rice a few times. It was a good time. New Orleans is a really wonderful tourist destination, in part because you can skim the surface of it and there’s so much to see. I suppose it’s telling that there’s a New Orleans Square at Disneyland.

I remember Mardi Gras. I remember getting lost at Mardis Gras. We had come over from Gretna to watch Parades. Maybe Bacchus or one of the other Crewes. We came over the bridge, and we were not really nearby home. I got lost. Apparently my parents were frantic, and trying to get the National Guardsmen to find me. Or were they Marines? Anyway, they were huge men in uniform.

Me? I watched the parade. I didn’t worry too much about finding my parents. I wonder if I felt I didn’t need to? Probably I knew that things would be fine, even if the streets were packed with thousands of people. Eventually the parade would end and I’d find my parents.

Now, to those of you wondering about the parades, and how much debauchery there is. Well, when I was in New Orleans I went to the non-risqué parades, which was the majority. For those of you thinking the parades at Mardi Gras are all “Show Us Your Tits”, well, that wasn’t my experience. That stuff all happens down in the French Quarter, and I was not exposed to it.

For me it was about the beads, I think that’s what it is for all the kids. Beads beads beads. Up until three weeks ago I still had some Mardi Gras Beads. There’s not much special about them, they’re cheap costume jewelry. But the point is they get thrown down and you have to catch them and snatch them. Imagine that a baseball field was nothing but fly balls, and everyone has a mitt. That’s what watching a parade was like for me as a 12-year old. It’s a competition to get the most beads, and of course doubloons. They’re coins, cheap, I think made from aluminum, inscribed with the name of the crewe, and/or the theme of the parade. Oh, and different parade members will throw out cups and other novelties. I remember being thrown a plastic 7″ single. Someone promoting their music via parade droppings. Oh, you’re wondering why I don’t have the beads anymore? Well, three (or was it four?) weeks ago Leah and I had a garage sale and I sold off my last bag of beads. We needed the dough, and the garage space, and I thought they might sell. A woman bought them for her small daughter. Perfect use for these things that had been sitting in various boxes and ziplock bags for 24 years.

Twenty-four years ago I was 12 years old and sitting in Mr. Fuchs (yes, as kids we had fun with his name, very dangerous to make puns or mispronounce a name like “Fuchs”) English class and I drew the Robot Fighter. The Robot Fighter is armed, and the giant robot attacking him is huge, and heavily, ridiculously armed. The giant robot has guns in its kneecaps, for goodness sake. I suppose the Robot Fighter represented me. We lived in New Orleans for two years. And I suppose even though my childhood was happy, I also endured a lot of stresses, growing up on the move. I would not in any way take back my childhood, but I remember that I was kind of an alien kid, and it took skills on my part to fit in, to find a place. I suppose it was there that I started to take on the aspect of the nerd or geek. I would draw. I was way into Star Wars. I remember finding a Death Star playset in the trash. IN THE TRASH! How could someone do that? Sure, it seemed to be covered in honey or tree sap or something, but I found it, and I cleaned it, and I kept it. Something like that cannot be put to waste!

I remember a few kids I really thought were cool. Greg Griffin, “Booger” Becker, Ritchie Gautreaux. I wonder if they’ll google this someday and find themselves. Pat Keating collected stickers, smelly stickers I think. You would scratch them and they smelled, and he had a notebook devoted to this hobby. And for a while we played marbles and everyone had to try and have the best marbles ever.

And I remember stealing once. Once. I pilfered a Halloween Mask from the drugstore on the way to school. I think I may have bought a baby ruth candy bar as a cover. I must’ve slipped it into my jacket or something. Even 24 years later, I’m ashamed. I’m happy to say I never made stealing a part of my character. I think I was scared by how easy it was to do. Like, shouldn’t there be security? Well in my teens I took an ashtray from Del Taco. I still have the ashtray — it’s really good for holding change. I think I used it once to actually let someone smoke. And it’s glass, so it cleans up real nice so I don’t actually have to have anything smoky lingering in it.

I wonder why the Robot Fighter doesn’t negotiate with the bad robot. I guess I could not see compromise as a way to be for the Robot Fighter. Empathy is not something they build-in from the Robot Factory. Heck, everyone knows that, from Terminator 2. Robot Fighters have to learn things along the way though: to stay alive, fight evil, be happy and carry out their missions. That’s the key, to know when to lower your defenses and risk your self to be a part of the world.

Joe Crawford wrote this Friday June 24th 2005 at 6:35am That was 16 years ago. The Date 5 comments tags→ drawings memories robots

Dude… it’s uncanny how similar you and I are sometimes… I have books and books full of robot fighters and random faces and stuff… always the Pigma Micron although I always penciled first and inked them in. For a while it was all about Ink washes and the tightest possible cross-hatches.

Usually I was too lazy to be that serious. I had it in my mind that the idea was to get it right *the first time* and let the drawing flow out.

Yeah, uncanny. Must be why we’re friends. Or maybe it’s something typical about internerds or something.

But then, I don’t skateboard, so maybe it’s all a mystery.

Even the style is similar… cartoony and edgy…

Those are nice man! I think I’ve seen the robot invasion thing before… 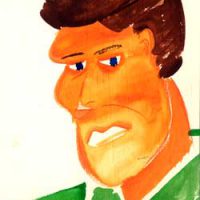