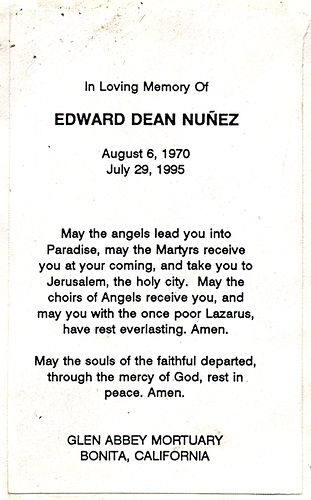 In 1995 I was living in Los Angeles. I had moved back to California after having gone to school and worked as a Respiratory Therapist for a while. I was back to figure out how to get into the movie business somehow. I took classes at UCLA Extension and was not sure what to do, exactly, but I was doing it. It was on this path that I would eventually find the web, web programming, and graphic design.

There was one year, though, that I really didn’t enjoy Con. I went, but it fell flat.

This was before cell phones were common, but I had the habit of calling my home phone to check my messages. There was a digital woman’s voice who would say, haltingly, “YOU HAVE *TWO* MESSAGES” then I could give touch-tone instructions to the phone to play, rewind, replay messages.

I was compulsive about checking my messages. I was working per diem as an RT, and would sometimes get offered extra shifts to work, or get cancelled if they didn’t need me to work. Once I was in that habit, I used it all the time.

I left for Comic Con on a Saturday morning, driving the hundred plus miles from my studio apartment to San Diego. I checked into Con, I think I had bought a pass so it went by swiftly.

But after getting set up at Con, I checked my messages.

I can’t remember if it was 12 or 15 messages on my machine, but it was more messages than I had ever had on the machine, and higher a number than I thought the machine could say. The readout on the physical machine was 2 digits, so I suppose there were digital recordings from none to 99 messages in there.

I could not for the life of me imagine why I could possibly have that many messages.

The messages were from my Mom, my cousin Leeman, and I think my Grandmother (on my Dad’s side). I can’t remember who all called. My memory is fuzzy, unreliable, and full to bursting with emotion. It’s like a haze of bad memory. They all said there was bad news. It had to do with my cousin Eddie. I don’t think they came right out and said what had happened, but it was very bad. I could tell that much, and he was dead. Whether they said, implied it, or I inferred it I do not remember.

I got ahold of someone on the phone, maybe I got Leeman on the phone? I know I talked with my Mother. She was devastated and crying. I could not fathom what I was learning. My cousin, just a few months younger than me, had killed himself by hanging himself in the shower. He had kids. He was married. And now he was dead. I remember thinking immediately that we should be talking about him in the past tense. But when someone dies they still are there in the present tense. “He is married.” It’s funny what you remember when BIG STUFF happens to you in your life. It’s never what you expect.

I was angry and shocked and pretty much dumbfounded about the whole thing. Why would he do it?

Well, the easy answer was that Ed had problems. He didn’t finish high school. He couldn’t hold onto a job. He had gotten involved with drugs and was getting into trouble.

The last time I vividly remember Eddie he had been working at a convenience store, and I think he had gotten fired or they hired him back or something. He had a bag full of car stereos he wanted to know if we wanted to buy. We? I think Bronson and I were offered that deal. We declined I think. I think we tried to give him advice, but we really didn’t think much of it. Eddie was always into shenanigans of some sort. Ed was a survivor, a scrapper. Always in trouble, but always managed to get through it.

I have photos of Ed and his smile glows at me. Big giant grin, like everything is so funny, everything is so wonderful. He used to tease me a little bit. With him, and with Shannon, the 1970 babies in my Mom’s Mom’s house, we used to get fed at the same time, and grew up together. Eddie was the clown, always happy and entertaining. We had much fun. I miss the boy. I miss the man. I wish he had not done what he did.

I decided then that I thought that suicide was not the way out. All the romanticization of suicide is so much bullshit. I decided I liked Joy Division a lot less. I had always found Ian Curtis, their lead singer, a romantic figure. Actually _facing_ the suicide of someone I knew though, that was something else. It was just sad. And not sad in a Morrissey-song kind of way, or in a Walt Whitman kind of way, but in an eternal way.

As my marriage fell apart, I had many thoughts of suicide. It seemed like the way to end pain. the equation was: I hurt, and I will stop hurting if I do this. I don’t think I was very close to it, but the thought would cross my mind and linger there. That’s usually when I would try and _do_ something. I saw a counselor, I go for a walk, I go for a drive, I read a book, I sleep. Self-destruction is not productive. That’s a nice tautology there, eh? _Self-destruction is not productive._

So when Comic-Con comes around, though I have been a dozen or more times, I always think of Eddie. Comic-Con is coming next week to San Diego. I will miss it this year, but I vow to go the year after. This year I’m really focusing on making sure this home is a good one, and I’m taking care of me.

I left Con immediately after I found out about Eddie. I went to the my Grandma’s house and the family was collecting there, we prayed and cried and it sucked but it was the process. That house was in mourning, as we all were.

Joe Crawford blogged this at 2:38pm in 2005 in July. The 9th was a Saturday. You are reading this 15 years later. Comment. There are 3 comments Tweet. Send email. It has hashtags→ memories . The Date

Very sad. How are Eddie’s kids doing? They must be teenagers by now? I agree with you. Ultimately it’s selfish. You decide that your need to end your pain is more important than the devastation and grief you will leave your family with. I can only guess that people in those situations are too immersed in their pain to think of others or they push themselves over the edge with drugs.

I still like Joy Division, but my friends who didn’t grow up listening to it, don’t get what’s so great about it ;).

I don’t have a lot of contact with his kids, but I see them every few years. They seem to be doing fine. His widow has remarried to a very kind man.

And yeah, Joy Division is definitely an acquired taste.