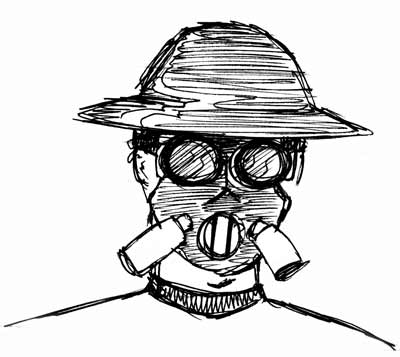 I like this one. Most of the work I’ve ever done with a science fiction feel was in a cyberpunk vein, but one of my favorite books was Difference Engine, (mentioned before in my book post)and the idea of alternate history is very compelling to me.

I think what I was thinking of with this piece, with a British helmet, and a gas mask, was the Alan Moore comic book V for Vendetta, a wonderfully British (with a capital “B”) rendering of a futuristic dystopia.

Here’s a synopsis of V for Vendetta from Wikipedia.

The series is set in a future Britain where, in the chaos following a limited nuclear war that left the country mostly physically intact, a fascist one-party state has arisen. It resembles the Nazi regime — including government-controlled media, secret police, and concentration camps for racial and sexual minorities — but with a British cultural flavour, and a greater reliance on technology, especially closed-circuit television monitoring in the mode of George Orwell’s 1984. (CCTV had not yet become common in England at the time Moore wrote the series.) When the series begins, political conflict has ended, the death camps have finished their work and been closed, and the public is largely complacent, until “V” — a terrorist and self-proclaimed anarchist, who wears a Guy Fawkes mask and has an improbable array of abilities and resources — begins an elaborate, violent, and theatrical campaign to bring down the government.

Even the premise is wonderful. It’s still in print, and you can usually find it out at the larger chain bookstores, or even via Amazon.

Anyway, back to the drawing: It’s minimal and was done fast, on notebook paper. I think this is a “classroom drawing.” For posting I’ve removed the blue lines underneath the drawing itself. I am not doing raw scans for most of these things, I’m doing cleanup.

What I might do with the drawings down the line I have no idea. I have thought about doing an online comic or comic strip, and I’ve considered what kind of licenses might allow others to use these drawings as raw material, but for now just scanning the things is very enjoyable to me. It allows me to revisit my artistic past, and explore the possibilities of my artistic future, as well.

Joe Crawford wrote this Monday July 11th 2005 at 5:35pm That was 16 years ago. The Date One comment tags→ drawings memories 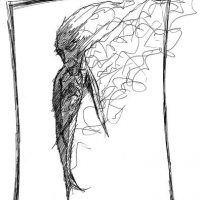