I have some words that I use that, when I apply to my wife, they get funny looks.

They’re great words, but not ones most people use on a regular basis.

Logy is one. Here’s the definition from answers.com:

I do believe we all feel that way sometimes. I think I first heard the word on _Late Night with David Letterman_, way back in the day.

Today I definitely feel logy. My sleep was nonstop work. The whole night I dreamt that I was at work, in a hospital, at UVa, but there was no work. I wandered the halls like a ghost while other people worked. Occasionally I would come across people I sort of knew, but then they would fast forward. At some point I remember wondering if I had good benefits in this job, particularly whether this job paid for a membership in a health club. The random assembly of healthcare workers in the elevator when I asked replied that no, they don’t. I don’t remember if that matches reality. I think the hospital employees could use the UVa facilities at a reduced rate or something.

But the repetition of the dream, going from unit to unit, floor to floor, riding in elevators, walking the halls was a bit maddening. Not as scary as a nightmare, but numbing nonetheless.

I have to say it’s put me in kind of a negative mood this morning, which I’m slowly transitioning out of.

In the meantime, I feel a little logy this morning.

Logy is a peculiar word, and I can’t remember ever reading it, but I like it. It has an interesting history. Maven’s Word of the Day:

The word you have in mind is indeed spelled logy, and its pronunciation is indeed “LOW-gee” (with a hard g) (though it is sometimes pronounced “LAH-gee,” as if the first element were log, which it may in fact be), and its meaning is indeed ‘sluggish; lacking physical or mental energy or vitality; lethargic; dull’.

So what do you need me for?

The origin of logy is not certain. It may be from a Dutch word log ‘heavy; dull; cumbersome’, cognate with a Middle Low German word meaning ‘sluggish’. It could also be a variant of a (British) English dialect word loggy, which is derived from log; this word is from the 1840s.

Logy is an Americanism, first recorded in the 1840s though apparently not common until later in the nineteenth century. It is fairly widespread, but more common in the northern and western parts of the country.

Blame Dave for this one. I never have heard anyone else ever say it but me.

The other word Leah does not care for is “giddy.” Giddy’s a fine word, and I actually like to be giddy, but I think I must say it in a way that is not totally in the spirit of love or something, like giddy is a negative. But I dig giddy. Into my life this morning I would be delighted with some giddy to come my way.

Words are fascinating to me.

Logy? Sounds like something you spit out after a productive cough. Yuck.

Ooo, wait, semi-related: I learned a new word yesterday for the first time in a long time: lagniappe. I saw it in the latest excellent Joel Spolsky article – http://joelonsoftware.com/articles/HighNotes.html – and just had to share, it’s not often that a friend is also noodling about word-smithing.

Wouldn’t that be “loogie?”

I would not want a loogie as a lagniappe.

Joe, thank you for taking up the baton of disgustingness and runnning with it – you win.

Hey, there’s a new word! Digustingness. Sounds like a bodily condition, like an inflammation of the knee. “Digustingness, noun. Example usage: I considered going out to eat with my parents tonight, but my disgustingness was acting up and I was sure I’d ruin their cheer.” 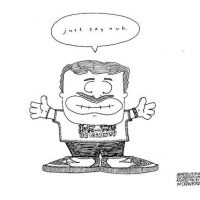