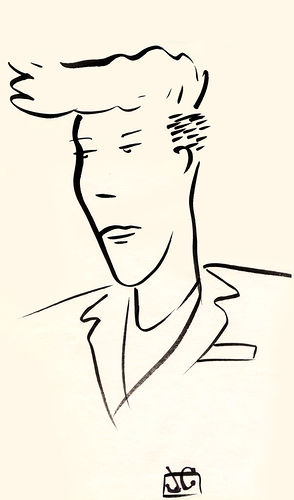 Here’s that androgynous girl again. A minimal bit of brush and ink and there’s an image of a girl. This is an earlier incarnation of what became Leather Jacket Girl 1989. I like that a lot is conveyed with a very few strokes.

With the space afforded by my big workbench back then, I was very free to experiment with various media. Without a doubt I enjoyed and was frustrated by ink and brush the most. It’s absolutely unforgiving of error. So the zen challenge, and I did very much look at it as a zen challenge, was to get all the strokes out and have it be coherent and beautiful and have no errors.

Anything else was not perfection. I suppose this is a kind of perversion of zen. The idea is not to be manically perfectionist, rather to be one with the medium and with your emotions as you embark on the artwork.

I threw out a lot of pictures. I did try to learn from them, but there were a lot of discards. I think I might have learned more perhaps had I done more pieces with a pencil underdrawing and then inked over that. But then that spontaneity I was seeking could be lost.

I had read a lot about Chinese and Japanese Calligraphy at that time, and I very much liked their quick brushstrokes that evoked an image and emotion. I still love that work.

One stumbling block I do set up for myself is that I want to be inspired and have the work flow out effortlessly. The block is when I let that prevent me from doing more experiements. My “good student self” has diligence to pursue something even when I fail repeatedly.

I find that goal hard, but I do try and pursue it to improvement. I suppose the story of this, my second marriage, is of working to improve even as things are difficult. Not that my marriage is so difficult, but it is a marriage, and as such is the blending of two egos and persons in a partnership of love.

As M. Scott Peck says, in _The Road Less Travelled_, “Life is hard.” He also talks about how marriage is the institution which smooths our rough edges and lets us have a view of life from a view of love and acceptance of the essential hardness of life.

Anyway, I digress. So let’s digress some more.

Yesterday, on websandiego there was something of a flamewar. While it’s nice to see activity there, it is frustrating that it is so devisive. Hurt feelings are _so trivially easy_ to evoke in the context of a mailing list. And a strong criticism can feel like a personal attack on someone and on their business. The fact is, in this world one will be exposed to people they disagree with. A person’s reaction to such criticism shows the “content of their character” I think.

Looking back on the thread, I do not regret my words. There is much to learn from that thread for me. Not the least of which is the reminder that I have allowed websandiego to drift somewhat, and that perhaps I can, even from this distance, do things to foster that community.

On Sunday Leah watched _Nicholas Nickleby_, which was not bad at all for a costume drama. There was a speech at the end that does not seem to appear in the actual book to the effect of: “All lives are a tragedy; happiness is not to be expected, but the key is to recognize happiness when it comes and to delight in in.”

Joe Crawford blogged this at 9:04am in 2005 in July. The 26th was a Tuesday. You are reading this 15 years later. Comment. There is one comment Tweet. Send email. It has hashtags→ drawings memories . The Date

i just went and read the thread. dude.
you are such a steller guy, mr. crawford.
xo