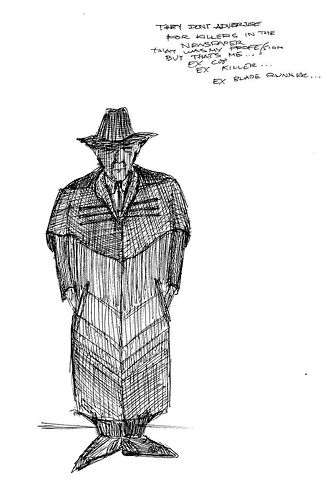 Blade Runner is one of my favoritest movies EVAR (as the kids would say).

I believe I’ve talked about my liking of cyberpunk things before, and Blade Runner is definitely in that category.

When Blade Runner was rereleased in 1992 in the Director’s Cut (with the lost narration and the not-The Shining ending) I drove to Richmond from Charlottesville to see it. I drove the 68 miles without a second thought. I wanted to see the newer version.

My mind races with thoughts about BR and my relationship to it. I think it was Mr. Johnson, my short story teacher from High School, who was convinced I could write, who lent a copy of the movie on VHS to me and Chris Greazel. I think it was a fuzzy dupe and Chris and I tried to watch it on my Grandparent’s VCR (neither of us had one at home). Is that a misremembrance? Not sure. But we dug it.

Maybe some of my Japan fetish came from this film. There’s the giant video mural of a geisha eating some candy or gum. There’s the idea of cityspeak in the movie, which is a mishmash of Spanish, Japanese, German, what-have-you. There’s a blue-eyed Edward James Olmos with blue contact lenses, as a cop, sort of hispanic, sort of not, dressed like a natty vato in an East L.A. style.

As an aside, there’s an artificial owl when Deckard goes to see Tyrell for the first time:

Rachael: Do you like our owl?
Deckard: It’s artificial?
Rachael: Of course it is.
Deckard: Must be expensive.
Rachael: Very.
Rachael: I’m Rachael.
Deckard: Deckard.

Very little said, but the implication is that nature is dead. We killed it. It’s only 2019, but we killed nature off. Artificial snakes and snake scales.

Chris and I would go to Little Tokyo for years to get Japanese food in downtown L.A. based off the fact that the movie begins with Deckard getting noodles at some dive in downtown L.A.

I haven’t done much scanning of vehicles that I worked on, but Chris would draw vehicles incessantly, and this inspired me to do the same. Many things were retrofitted vehicles. Syd Mead did the production design for Blade Runner, and he was credited as the “Visual Futurist.” That term is as good a description as I could ever muster for my friend Chris.

I think it was in the late 1980s or so that we took a trip to Pasadena to an event called “Tools of the Trade” — it was a tradeshow for artists. What amazing toys! I remember thinking the puffy fabric paints were really cool. And brushpens! Those were some high-tech things. But the main reason we went was to see Syd Mead. Chris even got an autograph if I remember right. You can read more about Syd Mead and his amazing talents at sydmead.com. The Wikipedia article about him could use some work. Syd also went to Art Center, a school both Chris and I hoped to attend, though as I said before, I never really applied myself to the task of applying to any school.

The infamous Art Center story is that one day after class Chris and I just decided after school to go up to Art Center and see what was in the gallery. Art Center always has cool stuff in their gallery, student work of all kinds. Chris was enthralled with the trans works, while I liked the illustration, art, and advertising works. Really amazing stuff, and things we aspired to. For years, it was a ritual of ours to return there to see what was in the gallery, and if we had time to hit the library and see what obscure transportation magazines from Japan Chris could find.

Oh, the infamous trip. So we just decided to go. No calling anyone. No messages. No notes, we just went. We got out of school at like 2 or 3pm. And we just went north. Took maybe 2 hours and change to get from San Diego to Pasadena. I remember, we just sorta winged it, and maybe got lost once on the way there. All the while playing tapes on this old tape recorder and player I had. The 1972 Volvo had an old AM radio in it. It was built like a tank, but did not have lots of power. We had a great time driving and talking and musing about — well, everything. We talked about the plausibility of various aspects of Star Trek and Star Wars. About alien intelligence, about the future of the world, the inevitability of a nuclear war before the end of the century. (In fact, I think I lost a bet to Chris that there would be nuclear weapons detonated in anger before 2000). Mind you we were in about 1986 or so here, so we were 16 and 17 years old. Just kids, really. Anyway, we had a great time, and we saw the gallery, and it blew our minds. Chris has been there before, but I think it was my first time there. I was sort of the instigator. The way it shapes up in my mind is Chris and I were eating at some fastfood joint (maybe it was the Carl’s Junior down the hill from University of San Diego?) and Chris was saying how cool it was. And I was in my “Say why not” phase and said, “well, let’s go.”

Man, I love the internet. Here’s the map of our journey, more or less. One hundred and thirty miles from USDHS to Art Center.

I forget how it all played out. I think I must’ve dropped Chris off at his car near school, then gone home. I think it was at about 1am or so that we got home after driving the distance and stopping for Chili and Coffee at some Denny’s, was it in San Clemente? I think I added oil on the way there. That Volvo burned oil.

I got home greeted by my mother, who was more upset, as in angry, than I had ever seen her in my life. She gave me a good talking to, stressing the fact that there was no notice given for this outlandish trip. I think my Dad was on call or aboard ship or somewhere else. I don’t remember. But my Mom was furious at me.

My memory really is hazy here, it was 20 years ago, but I believe when my Dad heard about this trip he quite liked it. I think he liked that it was this spunky thing that I went and did without really thinking of anyone but myself. I suppose the dichotomy between my parents here is a touchstone for how I learned to think of myself and how I make decisions. My mother, the responsible and familial parent, and my father, the iconoclast. Somehow in that mixed message parenting I managed to survive my teen years and had some fun too. Mostly, admittedly, I was not really taking good care of myself, but I did learn a lot. Which I suppose one way or another, you can’t avoid during your adolesence.

This week I’m going to see Bruce Sterling, an author who became famous during the Cyberpunk era, but whose work I had not yet read at the time of the Art Center trip. He will be speaking at Art Center. The last time I went was maybe 10 years ago. It’ll be fun to see how the place has changed.

It won’t be spur 0f the moment, and my Mom will not be upset at me, and I am giving notice that I’m going, but perhaps I’ll be as inspired this time as I was that time. We’ll see. 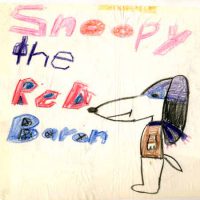 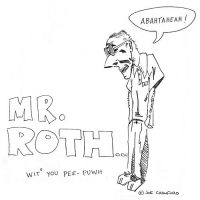