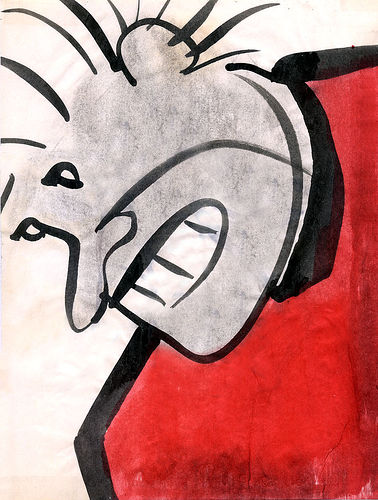 This is my favorite of the inky colored pieces I have. I’ve said before I don’t have that many pieces in color. Ones in black and white and red are among the strongest pieces though. I like the clarity of this one, decisive line work. This one is not with spray paint though, it’s with a red ink I had at the time.

There was an art store, I can’t remember the name, on Cass street in Pacific Beach and I would ride my bike there and browse their stuff. One day on clearance I found this set of inks, semi-clear, and on _sale_ that I really liked. I think I spent $12 on them, which was a lot for me at the time. Darned if remembering them doesn’t make me want to get another set!

I think the material it was most like is this Dr. Ph. Martin’s Bombay India Inks. It’s not the brand it was, but it looks similar. The one I had also had a dropper in the cap. At the time I would carry the inks around wherever I went. Not that I used them, but I have a packrat mentality.

It’s a pity I don’t have more pieces done with those inks. Perhaps when I get a chance I’ll get a set and do some work. I have much more fun with a brush than with a pen. And not just a “pen brush,” but a real brush and india ink can be great.

Oh, and I’m not even mentioning the charcoal I used here. I bought that for a drawing class I took at Mesa which I totally failed to get it together for. But I did have some fun with the various charcoals there.

Note to myself: One thing, this has been retouched a bit more than the other “spraypaint” items because there was something on the back of this image that showed through. I’ve done some Photoshopping out of that ghost of an image.

Joe Crawford blogged this at 7:51am in 2005 in August. The 15th was a Monday. You are reading this 14 years later. Comment. There are no comments Tweet. Send email. It has hashtags→ drawings memories . The Date