Good Morning Silicon Valley: We thought you said spend the $200 billion on “dark fiber”
…during the buildup to the 1996 Telecommunications Reform Act, the major U.S. telcos promised to deliver fiber to 86 million households by 2006 (we’re talking about fiber to the home, here). They asked for, and were given, some $200 billion in tax cuts and other incentives to pay for it. But the Bells didn’t spend that money on fiber upgrades — they spent it on long distance, wireless and inferior DSL services.

Joe Crawford wrote this Wednesday February 8th 2006 at 4:20pm That was 15 years ago. The Date Leave a comment 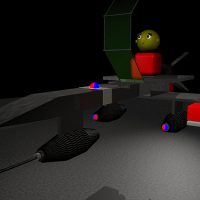 3D Model, Evolved.
Taking The Fun Out Of Rock