No longer sick this one.

So much to do so little to say!

A few things: Go see Idiocracy, it’s puerile and gross and dumb and smart as a tack. Definitely rated “R” though. You have been warned.
I still like Kinokuniya very much.

The Moorpark Packers (featuring two of my stepsons as players, another as a coach, and my stepdaughter as an assistant) are back in business.

Leah is pretty funny and is rewriting.

The weather is nice, but still pretty hot in Ojai.

I had fun last week reading Political Interpretations of the Wizard of Oz.

And look, we were cute in Utah, though squinty from harsh overhead noontime sunlight: 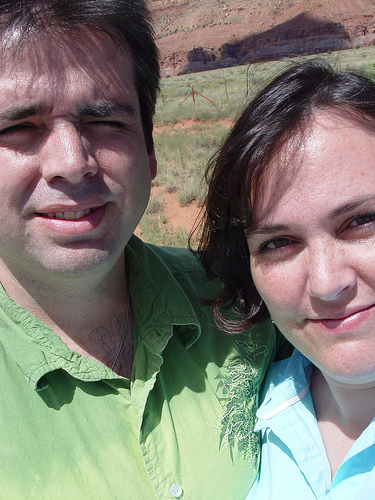 This is a shot of my father-in-law’s garden in Utah. It’s both wild and cultivated. We caught it out of season.
What is growing in your garden? 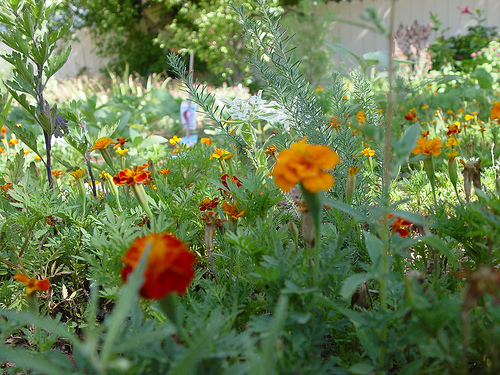 I’ve been listening to this guy‘s writings. I like him.

Also, news. Still very early on in the process, have a good thought, wish, prayer, smoke signal, what have you.

Can’t talk right now, so here are some lyrics from Sifl and Olly:

I’ve got laser eyes
Hey!
And I know what you’re thinking
Hey!
It comes as no surprise
The Christmas lights are blinking

For those small amount of you on the venn diagram who read me but don’t regularly read my Leahpeah, I point you to the latest update, with ultrasoundy goodness, on the gestational progress and situation.

Save a prayer for us all.

And what else? It’s been quite a few weeks. I’ve been sick quite a bit — first it was my gut – el vomito y more. This week it was la flema amarilla. Yucko. I hate being sick.

Finished up my contract in Ojai today. I liked Ojai. It sure did get hot there, but the place was real nice, and the people were real nice too. And hey, thirty years ago they filmed some car chases from Smokey and the Bandit there. I learned a great deal in dealing with my agency how I will do things differently next time that comes around, I mean, assuming it does. I also learned a bit about the markup attendant to my rate (77%, actually). Valuable intelligence, my friend. Knowledge is power.

Hrm, what else, my wife’s writing was featured on the Huffington Post the other day: “Feminist” Is An Eight-Letter Word: Talking with Gloria Steinem. How cool is that?

BBEdit and Interarchy and Mac OS X have all updated in the past few months, and I’m behind the curve on all of them. Too much Windows-emphasis from me right now! Sad! I’ll catch up before Christmas.

Speaking of goals, dude, I want a bike. Bike before Christmas is a goal as well.

Oh, and fixing San Diego Bloggers, which, merde! is utterly broken and has been for over a month. Sorry charlie. My old bad code was prone to SQL injection attacks and it died. I feel pretty bad about it, but with how busy I’ve been it’s fallen by the wayside. Sorry to the folks out there. Check bloggernetwork.org. Leah’s working on that one.

On the organized religion front, I’m not very impressed by my Pope’s recent comments. I mean, it’s simply uncouth to point out the butchery done in the name of someone else’s religion. Probably better to be contrite about the bloodshed your own religion has caused. It hurts me to my heart. I quite like this acknowledgement from the Catechism of the Catholic Church:

The Church’s relationship with the Muslims. “The plan of salvation also includes those who acknowledge the Creator, in the first place amongst whom are the Muslims; these profess to hold the faith of Abraham, and together with us they adore the one, merciful God, mankind’s judge on the last day.”

On Monday I start a new job, and I’m looking forward to it.

There are other irons in the fire for me too, but for now, that’s enough.

Have a nice weekend y’all.

The central insight here is that those killed by terrorists are NOT the intended targets. It’s us, the onlookers. The worriers. Every time the US bans some new fluid or gel, we let the terrorists win. That’s dumb. I’m sick of it. Read the whole essay.

Crypto-Gram: September 15, 2006
What the Terrorists Want

On August 16, two men were escorted off a plane headed for Manchester, England, because some passengers thought they looked either Asian or Middle Eastern, might have been talking Arabic, wore leather jackets, and looked at their watches — and the passengers refused to fly with them on board. The men were questioned for several hours and then released.

On August 15, an entire airport terminal was evacuated because someone’s cosmetics triggered a false positive for explosives. The same day, a Muslim man was removed from an airplane in Denver for reciting prayers. The Transportation Security Administration decided that the flight crew overreacted, but he still had to spend the night in Denver before flying home the next day. The next day, a Port of Seattle terminal was evacuated because a couple of dogs gave a false alarm for explosives.

On August 19, a plane made an emergency landing in Tampa, Florida, after the crew became suspicious because two of the lavatory doors were locked. The plane was searched, but nothing was found. Meanwhile, a man who tampered with a bathroom smoke detector on a flight to San Antonio was cleared of terrorism, but only after having his house searched.

On August 16, a woman suffered a panic attack and became violent on a flight from London to Washington, so the plane was escorted to the Boston airport by fighter jets. “The woman was carrying hand cream and matches but was not a terrorist threat,” said the TSA spokesman after the incident.

And on August 18, a plane flying from London to Egypt made an emergency landing in Italy when someone found a bomb threat scrawled on an air sickness bag. Nothing was found on the plane, and no one knows how long the note was on board.

I’d like everyone to take a deep breath and listen for a minute.

The point of terrorism is to cause terror, sometimes to further a political goal and sometimes out of sheer hatred. The people terrorists kill are not the targets; they are collateral damage. And blowing up planes, trains, markets, or buses is not the goal; those are just tactics. The real targets of terrorism are the rest of us: the billions of us who are not killed but are terrorized because of the killing. The real point of terrorism is not the act itself, but our reaction to the act.

And we’re doing exactly what the terrorists want.

We’re all a little jumpy after the recent arrest of 23 terror suspects in Great Britain. The men were reportedly plotting a liquid-explosive attack on airplanes, and both the press and politicians have been trumpeting the story ever since.

There’s Always Someone Cooler Than You2006Sep16

It looks like it’s going to be a beautiful day. Radness. There’s laundry to fold. Programming to do. Breakfast to have.

Go on about your business.

Pre-emptive lyrics of the day for Monday:

If you want some entertainment, check out the new Weird Al: White and Nerdy.

For the record, I don’t know Klingon. But I do know JavaScript. 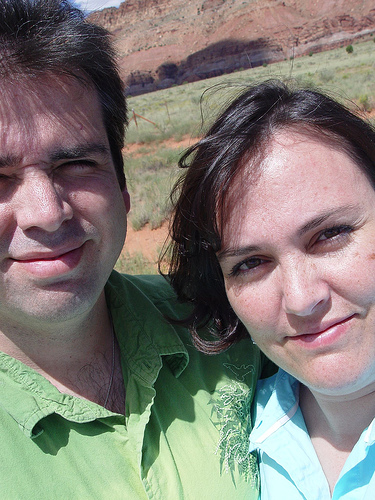 It’s been a month since this shot was taken. That was a pretty good trip. I never did say more about my Greyhound Bus trip, particularly the part where I was explaining to the nice bus driver how I lost my boarding pass while he himself was almost about to come to blows with another man boarding the bus. That’s a heckuva story, actually, if I ever get to it.

As it is, I do have a new job, and I do like it. It’s a bit of everything, especially UI work. But also some ASP, PHP, SQL Server, MySQL. And we’re migrating to Java/Oracle. Plus there’s occasional fires to put out, which is fun. And the hours are good. I’m so looking forward to it all.

It’s the magic hour now, very pretty sunrise today. Time to get started with the day.

Hey! I know that guy! Check him out on tv: My Word with Douglas E. Welch: Douglas on YourLA today!

The patient is feeling slightly better. Last night she was feverish, in pain, and honestly we were concerned that we might need to go to the Emergency Room. But as the night wore on, her fever dropped, and she’s feeling a bit better. She’s still bleeding some, but not copious. We’re watching her real close, and today she seems almost chipper. Last night she was looking as poorly as I’ve ever seen her. Pale, sweaty, feverish, weak, barely communicative. But her vital signs were okay, and as I said, her fever dropped. She even had some chicken noodle soup before the end of the night. When I got a text message today that she had had even more, I was so proud.

Honestly, everything has taken second stage with this miscarriage. But things are getting back to normal, I hope for good.

Thanks so much for all your thoughtful comments and emails. Your thoughts and wishes and prayers are most welcome and actively comforting.

I dig this song, as melodramatic as it is. The version I am listening to is by The Puppini Sisters though. British close harmony is wacky. Think Andrews Sisters.

Ooh, it gets dark! It gets lonely,
On the other side from you.
I pine a lot. I find the lot
Falls through without you.
I’m coming back, love.
Cruel Heathcliff, my one dream,
My only master.