My buddy missewon has cancer. Her spirits are up. That rocks.

Like I said in that last post, it’s Advent. [Advent (from the Latin Adventus, sc. Redemptoris, “the coming of the Saviour”) is a holy season of the Christian church, the period of expectant waiting and preparation for the celebration of the Nativity of Christ, also known as the season of Christmas. It is the beginning of the Western Christian year. (The Eastern churches begin the year on 1 September.)] Maybe that’s something happening, something in the air. Maybe after the political winds shifted last month, there’s a new kind of optimism happening. Maybe it’s even religious or spiritual in nature?

Or maybe people, while being cynical about the Christmas and Holiday stuff ip all over the place, seemingly overnight, are suffused with Holiday spirit?

Or maybe people just are feeling good because they get more days off work during the holidays?

At Mass this morning, the priest mentioned the UCLA/USC game, which is a huge local football (and otherwise) rivalry, and which UCLA won for the first time in a while. Even mathowie mentioned it, and he’s not even in L.A. anymore. Admittedly, we’re in Ventura County and a few dozen miles away from the heart of it, but it’s still out there in the culture. My stepkids love USC. LOVE it. Here’s a photo chosen by pure chance from leah‘s flickrstream. Tyler’s hero is Reggie Bush, former star running back for USC.

Personally I don’t really care for or care about football. But when my kids are on the field and playing, I can’t help but get into it. They lost last night, outplayed in the playoffs, but they had a great season and showed real heart and hard work. I never really had that experience as a youth. Sports was not something that spoke to me. Not, like, at all. Sports was something you did with your body. The question I would get asked by my elders was “do you want to be a ditchdigger?” – because apparently manual labor was the worst possible thing, ever. I took that to heart, and anything to do with the body was unimportant to me. It was an easy choice to make, because I was often overweight, very cerebral, and shy. So, no ditchdigging, and no sports. Well, there was some T-Ball: 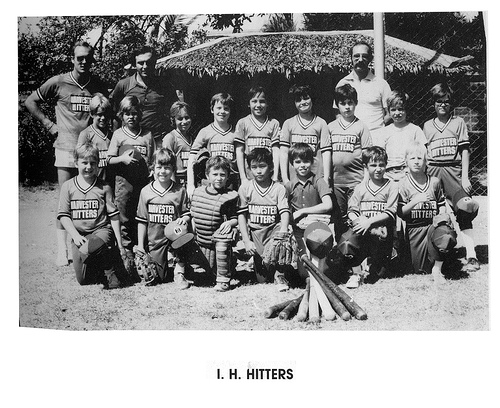 I was scared of the ball. I did enjoy playing catcher, which I did sometimes, sometimes. Of course, memory is tricky. I can say “I enjoyed it” and not really have much in the way of specific memories other than that the glove I had was huge and black and was my Dad’s “grownup” real glove. And I liked how the catcher’s extra mask and padding felt. That was fun to wear. But I also remember dreading being in the ourfield. I was scared of the ball. It all seemed so dumb most of the time. There were legos to be played with, there were books to read. What’s the big deal about some white ball?

There’s a quote in Neuromancer that resonated with me when I was younger. It addresses the disjunction between the head and the mind. (Background: Neuromancer is the sine qua non of cyberpunk literature). Case, the hero, or rather antihero, was a cyberspace cowboy, a hacker with skills to navigate the shared infospace of the net, the matrix, to do jobs, jacked directly into the matrix by means of a port on the side of his neck. He was poisoned by gangsters, and punishment. It meant he could no longer hack inside the matrix. He was a regular person.

For Case, who’d lived for the bodiless exultation of cyberspace, it was the Fall. In the bars he’d frequented as a cowboy hotshot, the elite stance involved a certain relaxed contempt for the flesh. The body was meat. Case fell into the prison of his own flesh.

The body means nothing. The mind, everything. Hey, I resembled that remark!

And look at that capitalization of “Fall” there. That’s an allusion to Adam and Eve’s expulsion from Eden. For what? For eating from the tree of knowledge. That William Gibson is a cagey. It blows me away that I began blogging before Gibson. But there he is now, blogging away. And here’s a wikipedia article on The Fall of Man.

No longer do I view my body as a prison. It’s a tool, a gift. I can enjoy it and take care of it, and even look forward to having a bike to enjoy. I am annoyed, though, when I have dental issues. Specifically, pain. I look forward to when I have dental insurance coverage again (T minus 28 days). I’m having some issues with my fillings. As in, two are not where they used to be. Thanks, I’ll pass on the ice cream.

I feel like I’m bursting with words today, but I’ll stop there for now. It will be another lovely day. I have some things to do around the house, and project work to do. There’s hope in the air, and expectation in the zeitgeist. It all feels like, victory.

Joe Crawford wrote this Sunday December 3rd 2006 at 10:48am That was 15 years ago. The Date Leave a comment

Click here to cancel reply.
King Kong
Lohan Not Clear On The Second “A”