Spectacles were invented in the 13th century. In the year of our Lord, 2007 — yesterday, in fact, I received a pair of eyeglasses which I will attempt to wear for reading and otherwise. I am 37 years old. Dr. Kubota, the Japanese-American eye doctor I went to was most professional. I really liked the Maneki Neko cat statue she had in her front office. I found it comforting. She even offered retinal scans if I wanted them. I’m still unsure what the diagnostic benefit would be. I’m merely happy to have something to reduce my eyestrain and make it possible for me to read for a longer period of time before my eyes are tired and I flop asleep, or am forced to stop. It’s had an impact and I’ve considered getting my eyes tested for several years. Fear of aging, I suppose, kept me away from finding out whether I really needed anything to help with my vision.

Eyes are a big theme in Blade Runner. Aging and death too. “Accelerated decrepitude” is what Sebastian has.

So what Dr. Kubota told me if I drove a truck for a living my eyes would have gotten bad in about another ten years. Quite literally, my job made my eyes worse.

Mamas don’t let your babies grow up to be web developers.

I’m okay with glasses. It’s the kind of identity hack I’m pleased to try out. I remember a class I had in High School — I answered to “Art” as my name in that class. It’s my middle name, and it was almost entirely people not from my own grade (I was a senior at the time). I liked exploring this other person.

In my twenties, I grew my hair very long, and sported a full beard or goatee. This was an effort to not look so babyfaced, and to be somewhat fearsome. A friend of mine recalls being asked who “that scary guy” was with him. That still makes me smile. Not that I wanted to look scary, but it was a shift from the “new kid”, the chubby kid that was my identity growing up.

Now of course I am older and wiser and to some extent people recognize me for more than my appearance. But like I said, I like the notion of the glasses. Here I am this morning, half awake, with the device that takes photographs and can transmit them, via the global communications network, to anywhere on the planet.

My friend Chris pointed out that here we are in 2007, the year that the TV miniseries Wild Palms was set in. 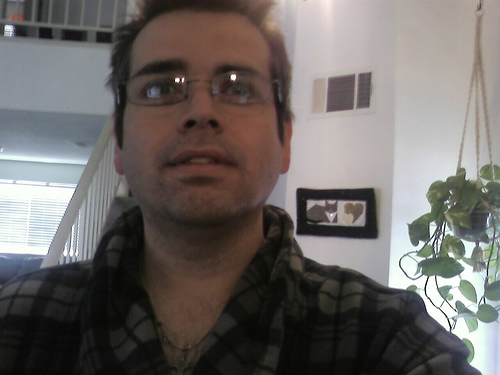 It’s really okay, aging. I kind of like it, and I’m glad of the fact that I do have some measure of control over the process. Not total control of course, I could come up with a cancer any day. But the means are there to wrest fleeting control over inevitability. This is a comfort I am learning, slowly, to take advantage of.

If only you could see what I’ve seen with your eyes.

It’s no surprise that futurity is what’s on my mind these days. I’m feeling much more like a father than ever before. I am a breadwinner in ways I never previously understood. I’m getting right with the universe and I think I have a slippery handle on what it means to be a spouse. What the twentysomething version of myself would make of where I am now, I have no idea. But Me, now, thinks the twentysomething me has some pretty screwed up priorities relationship-wise. I’d love to tell that kid it’s alright. But such time travel is not in the offing, as Napoleon Dynamite showed us, I suppose.

The 17 year old version of me was obsessed with Blade Runner. The current me really likes Blade Runner too. But I think Children of Men must join it on the shelf of my brain when I think about possible futures. 20 years ago me would marvel at the machine I’m typing this on: I can look at music and movies, I can photomanipulate images in a way Soviet autocrats would salivate over. I can instantly talk with people on any continent I choose. I own a device that is basically a Star Trek communicator. I can contact anyone on the planet with a similar device, and more, I can play electronic games on it that in 1987 were housed in cabinets the size of a refrigerator. If I choose I can send email directly to some of my heroes: particularly Bruce Sterling, but I see this as no big deal. The world is at once small, and yet vast in scope. The apocalyptic thinking of my 17 year old self would be satisfied by terrorism and chaos the world over. He would be shocked to learn that the Soviet Union no longer existed. He would be shocked to know that no nukes were fired in anger before the year 2000. I know, because I lost that bet with Chris. The bet from the 1980s was that a nuclear device would be used in anger before the 21st century. I was right, but I missed the point, right? The world is scary in different ways. I think too, that my young self would be shocked to hear that I had been divorced, ever. I was convinced that this would never happen to me. I think I’d be shocked to hear how much the Star Wars prequels basically stank. I would marvel at things like Google Earth and Wikipedia. I’d marvel at the fact that the person with whom I had associated eyeglasses with the most in my life, my father, no longer wore them because yet another eye doctor had used a laser ( a laser! how much more science fictional could you get in 1987?!?) to alter the shape of his eyeballs such that his vision was corrected surgically.

My having eyeglasses is a kind of reversal, maybe. “My boy, was just like me” indeed.

I’m not sure what any of all of this means, other than it’s early, I’m tired, and feeling a bit philosophical about these new glasses, which feel pretty good.

Those don’t look too bad at all… They look good on you.

Thanks Greg. I like them too. Wearing ’em right now!