Thomas PM Barnett remains my favorite geopolitical thinker. Embedded in his talk (downloadable as a Podcast) from Pop!Tech is a short talk on Iran. He makes a metaphor about Iran that feels very true, and with that short metaphor explains their desire for nuclear weapons:

Two thirds of the oil that comes out of the Straits of Hormuz goes east, not west. America takes about 15% of the oil. In 20 years we’re going to take about 10% of the Oil. Asia will take 80%. So it’s basically their oil, our blood. And they know it, and they don’t like to have that conversation. Three key players in this instance. Iran is the avis of oil and gas. It has two new big friends: China and India. We are not going to successfully isolate Iran under any circumstances. In fact, Iran is the key to making stability come about in the Middle East. They can effectively veto our efforts throughout the region. They have reached for the bomb, go figure! I walk up to a park bench — three guys sitting on a park bench — I shoot the guy sitting on the right through the forehead — I double tap the guy on the left — in the meantime the guy sitting in the middle reaches for a weapon. I ask you: is he irrational? [pause, crowd laughs] Or did I make that choice for him?! Is Iran irrational? Can it be deterred? I think it’s pretty clever. And I think we just got a demonstration of how clever they were, and are in Lebanon. A preemptive strike, very deftly waged. All the reasons why Nixon wanted Iran as a regional security partner are still there. They are Persian, not Arab. They lead the Shia world, not the Sunni, and Al Queda, and the global Salafi Jihadist movement is exclusively Sunni. So I look at Iran, and I see late Brezhnevian Soviet Union, a country ripe for the soft kill of connectivity. It’s the one country in the region where the people like us; and it’s the government that hates us.

The whole thing is worth watching. More about Tom.

Joe Crawford wrote this Sunday April 22nd 2007 at 7:13am That was 14 years ago. The Date Leave a comment tags→ iran politics thomasbarnett 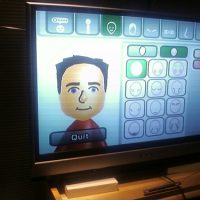 Mii for Me
Zappa on Miami Vice