Lot going on. My Mom’s in the hospital with a stroke and they’re still figuring all that out.

Take care and at some point I’ll update here.

Thanks for reading. Sorry for the brevity.

Thanks for all the well wishes, all. Here’s the latest on my Mom’s diagnosis. The stroke turns out to have been the thing to point out what’s really going on, and that’s Stage 4 cancer of the Kidney. I will be traveling to Virginia next month some time to assist where I can during her chemo.

When I last spoke to my sister she mentioned Mom has Christian, Catholic, New Age prayers going. My father added that she also had agnostic prayers going. I mentioned the kids and the Roberts’s were also praying, so add Mormon prayers to that mix. Thanks all!

Mom is recovering from her stroke at lightning speed. She is looking great and is progressing neurologically as the swelling in her brain goes down. The waver in her left-hand is much less pronounced today than it was yesterday and the strength in her left leg is much, much better. She can walk unassisted and was even dancing in her room when dad came to see her this morning.

The bad news is that the doctors have determined that mom has Stage 4 Renal Carcinoma, i.e. kidney cancer. She has a 7cm tumor on one of her kidneys that has metastasized and spread in a small area on one of her lungs. The doctors have also determined that it was a metastasis that traveled from the kidney to the brain stem that created the bleed that caused the stroke. The team of doctors who are working on mom’s treatment have devised a plan that involves a new chemotherapy drug to rid her body of the carcinoma in the kidney and the metastasis in her lung as well as more specialized and highly advanced, surgical technique to rid mom’s brain stem of the metastases that they think is there.

While the above diagnosis sounds bleak, the prognosis of mom’s treatment is really quite hopeful. The urologist has determined that mom’s survival from renal cancer is better than excellent based on a chart that predicts the outcome of patient survival depending on factors such as kidney functioning, diabetes, obesity, and smoking habits to name a few. Mom doesn’t have any of these things working against her and so, as Dad says, mom is “way off the charts,” “in the 96th/99th percentile,” and “is going to blow them out of the water.” In summary, if there is one person who can beat kidney cancer it’s going to be mom.

Mom’s spirits are high and has her head in the game. She said to us this morning that she’s done crying and has put on her big boxing gloves on and is ready to win this fight. She says it’s not going to go twelve rounds, but rather it will be like the Joe Louis and Max Schmeling’s fight. Not losing the first flight, but a fight that is only going two rounds.

The road ahead is going to be tough. However, mom has a great support structure from her friends and family. She is highly networked here in the community and I am overwhelmed by everyone who has come out to rally around and pray for mom. Thanks so much to all who have called or sent emails. It has made all the difference in her morale and the flowers you have sent have made a virtual garden in her room. My father is being my mom’s greatest advocate for mom and is getting the best doctors and nurses on board for mom’s care. 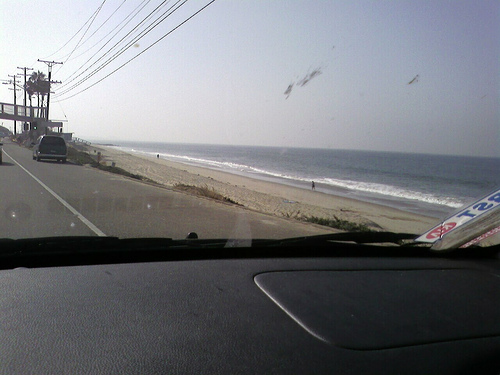 This a major upside of a more coastal commute. The ocean abides. Sometimes there are surfers. The water temperature is about 64°. Maybe I’ll try and go in soon. Chilly but good. Lots on my mind. Tyler graduated yesterday from 8th grade. Devon graduated from High School. Leah has photos. Monday my mom will have CyberKnife surgery. Looks awesomely like something from Logan’s Run or maybe James Bond. The intent is to work on the tumor on her brain stem. Yesterday she had a kidney biopsy. I’ll be flying back to Roanoke (it’s the city, not the island) next month. I went biking the other morning and it was really great.

All is well, scary as things are.

Thanks for the well-wishes. And if you get the notion, think of my mom when you say your prayers, futile as some of you may find that to be. 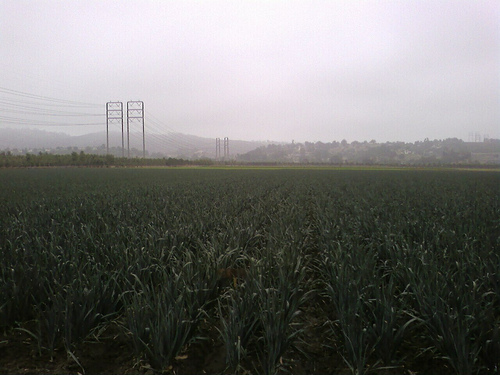 Good bike ride this morning. I wore bike shorts and they were much more comfortable than wearing regular shorts, which is sort of amazing since I was not sure they are even the right size. The improvement was noticeable. I rode for about an hour. I had the notion to go to Somis, but I’m not a strong enough rider to ride along 118 with confidence, I get tripped up too easily and the cars fly along that route. I’m glad of the opportunity to ride along the arroyo and some on the streets. It was pretty this morning. Calm, overcast, serene. Even so, lots of cars along the part of the ride that was roadway. I’ll stick to backroads for now. I also was eyeing the bike paths of Malibu, which look promising but would require a proper bike carrier. I have no idea how to choose one of those anyway, but since the back seat of the Kia goes down, I might be able to jam the bike in the trunk and bungie the trunk closed as best as possible. I have yet to try that though.

The green onions of the picture are the smell Leah and I sometimes smelled when we dropped of the kids. Now we live close enough to bike to see the darn things.

Lessons from riding today: bike shorts work for a reason. I got into some mud and it was too slick to really ride in. It was mud right alongside a field, and the texture of the soil along there was so fine, it reminded me of sand – almost no tooth to it the muddy part was seriously destabilizing. Another lesson: uphill is still hard work. I’m glad there are fewer hills here. I’m eager to a time when it’s not so hard to go uphill. And when I say uphill I literally mean almost any incline is hard work. Oh, also, I bought a bike tool and that came in handy tightening my handlebars. Also used my air pump which helped some. I’m still not certain what kind of tire pressure is right. Also getting a better handle on using the gears to effectively get around and still get a workout.

My Mom is back from the hospital. CyberKnife, as I said, will be Monday. Prayers to her and all in my family. I appreciate the various comments made here by friends and family alike. 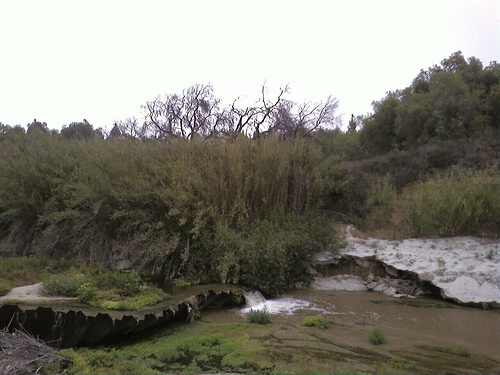 Another reflection from my Sunday bike ride: Entropy is a constant. How long it takes to do its business is the variable.

The various structures put up along the arroyo to tame its course are all in states of disrepair, gradually succumbing to the elements.

Word is my mother’s struggle with entropy, or rather with an organism that is fighting entropy in another way, is going well. Round 1 of the CyberKnife went well, and she should be getting Round 2 today. Final round 3 is tomorrow. Then chemo after that.

…specifically, get out of my living room.

Heck, I have a pre-made icon to denote kills. This should demonstrate my readiness.

First contact was a week and a half ago. We thought you were a lizard. That was sort of fun. I remembered lizards on the wall in the Philippines and that was cute! Then we realized what you were 3 days ago and intended, maybe with our subconsciences bothering us a little, to buy the glue traps. Today Leah actually got them, and for better or for worse, they work.  We’ve eliminated the food source, please leave. If you don’t leave, you will die.

You disapprove? Well, too bad! We’re in this war for the species, boys and girls.  [source]

Sad, really. “Where the heck are they coming from?” is what I want to know. It’s not clear to me. 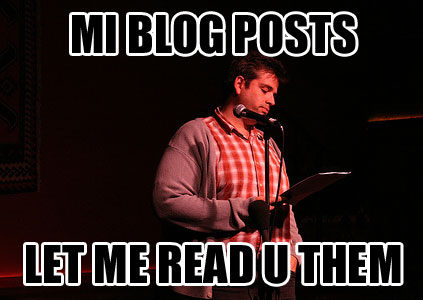 I had a pretty good time, despite being almost uncontrollably nervous about it beforehand.
I read my mom’s favorite post.
More about it at labloggerslive.com.
And more even more from leahpeah, emcee and organizer of the event!