This morning I saw this post on LAist about Google Maps Street View in L.A. That works well, but despite the fact that I live approximately in Los Angeles I was more interested in San Diego views. And downtown, my old stomping grounds is pretty well covered. When I was 18 years old (uh, that’s like 19 years ago hoss) I worked at the Central Library, pictured here inside the Street View interface at fullscreen: 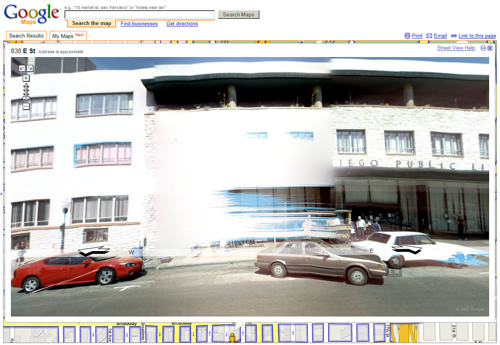 I like what they’ve done here. The interface has a lot going on, and despite some unsure clicking on my part, I managed to get around okay. I like the convention of having the marker you place change when you pick it up. The animation here reminds me of editing a Mii on a Wii, where you sort of pick the avatar up and he sort of struggles, as though you’ve picked up a rabbit who’s not too pleased to be picked up by the scruff of her neck.

I did some searching around San Diego with this and noticed the old AVENCOM offices at 10th and G were missing, it looks like they were demolished and replaced with housing. More condominiums it looks like. I was hoping to see Leah’s and my former place on 21st Street but there are not photos that far east of downtown.

I poked around Los Angeles too, it was fun to see some sites. There’s a lot of photos in there. The thing I keep coming back to is that this kind of “screen scraping the world” as in the Amazon Maps views that came out some years ago (doing basically what Google’s done here, but a bit clunkier), geotagging of photos on photo sharing sites, etc. … will only get more real-time, not less. I suppose there will be a view on these maps sometime for “live view” at some point. You might be working in your office and browse around to see what the line looks like at the local bakery, or directly see the traffic cameras on your commute.

None of these science fictional seeming technologies sounds crazy to me. And the fact that they don’t sound crazy indicates to me that they’re coming fast.

Joe Crawford blogged this at 8:22am in 2007 in August. The 8th was a Wednesday. You are reading this 13 years later. Comment. There are 2 comments Tweet. Send email. It has no hastags. The Date