This week, my hosting company, Pair.com, will be making several upgrades to the machine I host with.

The biggest transition is that my sites will now be running under PHP5 instead of PHP4.

Yesterday I upgraded the blogs I maintain to the latest and best version of WordPress — version 2.2.3 — and for the most part the transition was painless. Plugins needed to be upgraded, and one in particular has not been upgraded: wpPaginate, which I have replaced with WP-PageNavi. Some of the blogs affected are Rhonchi, Leahpeah, and Stew Sez (though I believe Stew has again abandoned blogging for a while).

Also, there’s a new facility inside WordPress under Manage > Export that allows the export of whole blogs to a single XML file. This is really cool, and this morning I did backups of all those blogs (and some private ones as well):

This is a WordPress eXtended RSS file generated by WordPress as an export of your blog. It contains information about your blog’s posts, comments, and categories. You may use this file to transfer that content from one site to another. This file is not intended to serve as a complete backup of your blog.

I’m not totally sure there are other things I need to change or upgrade to be compatible,  I have a lot of stray crap hosted and I’ll be looking forward to seeing if anything breaks. I think my coding practices are sound, and should hold up, but with system upgrades, one never knows.

In other news, yesterday Leah and I got some clarity on some issues that have been vexing us for a few weeks. Clarity is awesome. We also went to a football game at 8pm of the Moorpark Packers (Senior Green), for which Tony plays and Ty assistant-coaches. It was a good game, the boys won 22 to 6 against Simi. I took a few photos.

Oh, and I totally forgot, but yesterday I nerded out and got my YUI cheatsheets laminated. I’ve been working on a rather intense application of the DataTable library at work that I hope to be able to share real soon now. It’s been difficult but enjoyable to work on it. I’ve worked with large amounts of data before, but now where I’m really the one in charge of the whole application, even a small one. It’s forced me to learn about MySQL indexes. I’ve got two tables, one with 100,000 rows of data, and one with 250,000 rows, and I do joins against those two (and some other helper tables) and when my queries were running slow (8 seconds is too long to wait for a web page!) I ended up researching indexes and got things back in the millisecond range. It’s pretty happy stuff.

In totally unrelated news, I posted this photo the other day… 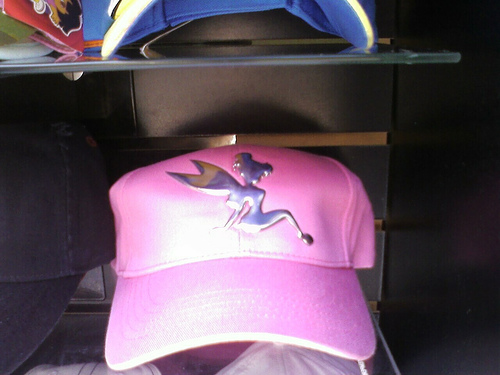 … and it has a Disney label on it, but I’ve utterly failed to find an online version of the hat, not in the Disney Store, not with Google searches, so maybe it’s not actually a licensed product.

Joe Crawford wrote this Sunday September 16th 2007 at 9:10am That was 13 years ago. The Date 3 comments tags→ pair.com programming webdev wordpress yui

Very often, Disney will sell merchandise like this at their parks and they never appear in stores. If it’s something you’re dying to wear, I can pick one up for you the next time I’m at Disneyland.

That logo is so awesome. it does seem a little shady for Disney though… do you think they’d license Tink that way?

although I might buy something with that on it. 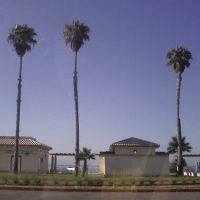