I find myself less pessimistic than I sometimes imagine I should be. When I started to write science fiction, the intelligent and informed position on humanity’s future was that it wasn’t going to have one at all. We’ve forgotten that a whole lot of smart people used to wake up every day thinking that that day could well be the day the world ended. So when I started writing what people saw as this grisly dystopian, punky science fiction, I actually felt that I was being wildly optimistic: “Hey, look — you do have a future. It’s kind of harsh, but here it is.” I wasn’t going the post-apocalyptic route, which, as a regular civilian walking around the world, was pretty much what I expected to happen myself.

It’s a rather nice surprise that I’ve not been consumed by nuclear fire, I’ll tell you that.

Well, we made it out of the cold war and into this one, and sometimes I feel like this line from Platoon:

All you got to do is make it out of here. It’s all gravy, everyday the rest of your life, gravy.

Bonus: we live in a world where we can pull up videos like this anytime — it’s, aptly, a peppy song about feeling sad:

I’m not sure aptly is a word, but I’m feeling thankful this week. I’m looking forward to Thanksgiving on Thursday.

Peace to you all.

Joe Crawford wrote this Tuesday November 20th 2007 at 1:39am That was 14 years ago. The Date One comment tags→ books cyberpunk futurism music video

Love the Muffs, love Kim, I have all their records, have seen them live again and again… I think it’s they’re done though. 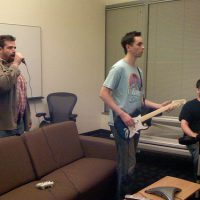