One of the funner side effects of working for a game company is that new games tend to get bought on the date of release. To that end, yesterday there was a copy of Rock Band in the office. Because of my previous experience (documented by Leah here) playing SingStar and Karaoke Revolution I was not intimidated to sing, which I’m rather proud of. I did ok on songs on Medium difficulty, but I utterly failed on the Garbage song “I think I’m Paranoid” on Hard. I enjoyed singing Gimme Shelter — but I find myself mystified by how Mick Jagger goes between the falsetto and his gruffer voice. All told I tried my hand at these songs:

There are photos! The Ferreteer took some. Let him show you them: 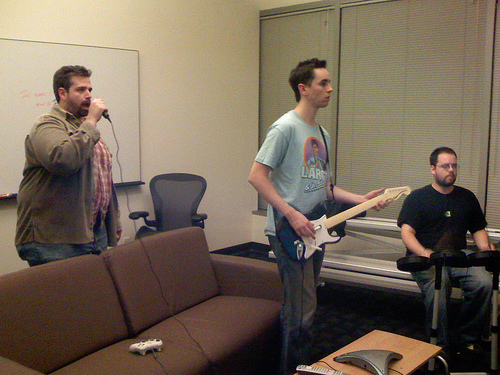 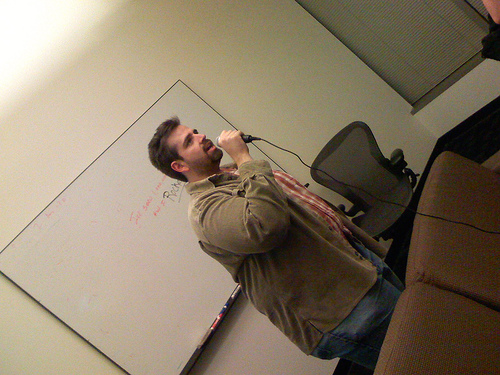 I completely lost track of time playing the game. It wasn’t till Leah texted me until I really realized we’d spent 3 hours on the game! I had fun. This was on one of the Xbox 360s at work and on a big TV. It is a loud game though. You really need to hear the song to be able to play, or at least I do, and the drums are loud, and usually the singer is loud. Honestly, it made me think of the stepkids – I can see Dev on guitars, Tony too, Alex singing, and Ty on the drums (which were difficult! I need to try again but it felt like I had no rhythm at all). The feel of the guitars are a bit different from Guitar Hero I and II — but not unlearnably so. The singing interface looks just like Karaoke Revolution, and that made it familiar to me. I’d love to pick this up, but really it demands stuff not in the budget yet — a wider TV (we have a conventional tube TV still and I don’t see how the interface for four people would fit on the TV at a good size — it’s really designed for a wide aspect ration), an Xbox360 (Joe says that there were 150 Xbox360 copies at the Best Buy he went to , and only 10 PS3 copies), and the game itself. I believe that adds up to more than $1500. I can’t justify the cost at this point, but I look forward to a day when I can. 🙂

This morning my voice is raw and tired.

Joe Crawford wrote this Wednesday November 21st 2007 at 8:18am That was 14 years ago. The Date 3 comments tags→ games work

You left out the best part! How can you tell the rock band tale without adding that, like all true rock bands, our gig was shut down by one of the VPs earlier in the day. The Man will never understand the Rock.

Whoops! I did bury the lede, it’s true! I like your leaving out the reason… it may well have been that we had troubles keeping our pants on, or maybe we were noisy.

The world may never know.