Retired General McCaffrey’s comments about Iraq after doing an extensive weeklong visit there, including leading with leadership and common people are heartening, particularly the bit about healing the moral stance of the Department of Defense. I really like the terse, matter-of-fact style. It reminds me a bit of the style in which Dave Ramsey gives financial advice.

General McCaffrey Iraq AAR (Small Wars Journal Blog)
The leadership of Secretary Bob Gates in DOD has produced a dramatic transformation of our national security effort which under the Rumsfeld leadership was characterized by: a failing under-resourced counter-insurgency strategy; illegal DOD orders on the abuse of human rights; disrespect for the media and the Congress and the other departments of government; massive self-denial on wartime intelligence; and an internal civilian-imposed integrity problem in the Armed Forces — that punished candor, de-centralized operations, and commanders initiative.

Admiral Mullen as CJCS and Admiral Fallon as CENTCOM Commander bring hard-nosed realism and integrity of decision-making to an open and collaborative process which re-emerged as Mr. Rumsfeld left office. (Mr. Rumsfeld was an American patriot, of great personal talent, energy, experience, bureaucratic cleverness, and charisma — who operated with personal arrogance, intimidation and disrespect for the military, lack of forthright candor, avoidance of personal responsibility, and fundamental bad judgment.)

Secretary Gates has turned the situation around with little drama in a remarkable display of wisdom, integrity, and effective senior leadership of a very complex and powerful organization. General Petraeus now has the complete latitude and trust in his own Departmental senior civilian leadership to have successfully changed the command climate in the combat force in Iraq. His commanders now are empowered to act in concert with strategic guidance. They can frankly level with the media and external visitors. I heard this from many senior leaders — from three star General to Captain Company commanders.

Joe Crawford wrote this Sunday December 30th 2007 at 8:38am That was 14 years ago. The Date One comment tags→ politics war 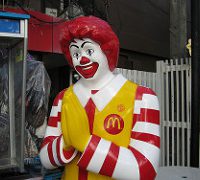