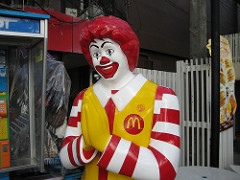 Bill Rini was in Thailand for Christmas and took a lot of great photos. but I really like this one of a statue of Ronald McDonald with his hands in what I think might be a Buddhist greeting.

You would be correct. Rather than shake hands or give the old European (or cheesy Hollywood) kiss on the cheek the Thai people bring their hands together and slightly bow as a sign of greeting, goodbye, thank you, and respect. This is called a wai. Even when you watch the nightly news or sports the on-air personality will wai the camera.

It has different forms based on the class system in Thailand. Ronald’s mid-chest level and slight dip wai is a general show of respect. For a boss or very senior person the hands might move all the way up near the mouth and the dipping of the head would be much lower and held longer. When you watch people show respect to a Buddha shrine they will often move their hands all the way to their forhead. And all wais should be returned. To not return a wai is very rude.

Though it’s certainly not a difficult gesture to pull off the difference between foreigners and Thai is remarkable. Thai’s have a natural grace to it and though it’s difficult to describe it comes off as such a peaceful gesture. When the Thai lifts his/her head it is usually done as they bring a warm and genuine small to their face.

Being around many westernized Thai people they’ll often use both the wai and then a kiss on the cheek or a shake of the hand. Some who think it’s cool to be very westernized skip the whole thing and go with the more common western greetings they’ve picked up from foreigners and in movies and television.

It does get a little confusing though. I was at a NYE party with a group of friends that was a good mix of foreigners, Thais with some but limited exposure to foreigners and Thais who are almost a little too westernized. Some would wai when first meeting you, some would wai and give you a kiss on the cheek (mostly if you’ve known them for awhile), and some would just say “Hey, how’s it going?” So in order to not look too awkward – like leaning in for a kiss and running into a wai that you need to return – you sort of have to remember whether someone is going to wai you first or go straight for a kiss on the cheek. And they may change their behavior depending on how well they know you.

Usually people wai as a thank you as well. Even Thais who might not wai you as a greeting will usually wai you as a thank you. If you order a round of drinks or when you’re paying a bill and leave a tip you most certainly receive a wai.

Here’s a good article on the wai though I think the author writes from a very strict understanding of the gesture and doesn’t take into account the younger generation of Thai who have grown up in a more urbanized, global world.

Goodness Bill, thanks so much for the background on this tradition. I wonder about US cultures lack of these kinds of gestures, and what is replacing it.