TMBG Lyrics for the morning, from Older:

Go ahead and watch the video:

Seriously though, Leah’s a year older, but still a beacon of awesome. 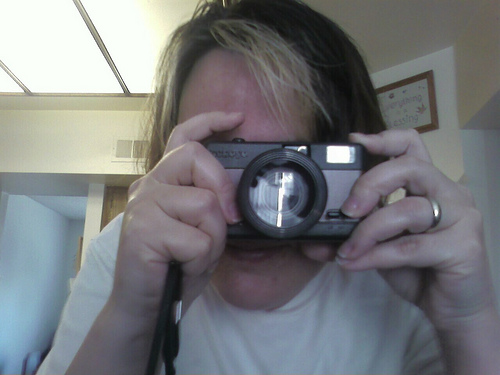 And also in the vein of awesome, aging, and cool, Professor Sassy Lee “Matt” Sassburton, Esq. and his lovely wife Beth are expecting! I knew Sassy when he was knee high to a pup, or thereabouts, but I’m pleased as punch as I know whatever the sex of the offspring, he or she will be inculcated with a deep knowledge of haberdashery, unit testing, grinding rails, and Simpson’s trivia. Leah and I wish the bun in the oven, as well as the bun’s parents, only the best.

You know, I had planned this to be a short post, but mayhaps it has a need to be longer. Perhaps I shall address some miscellany. What else has been on my mind, you may endeavor to ask?

They say in social situations to avoid discussing politics and religion. So let’s be anti-social and address a bit of both.

Politically, very interesting things are afoot here in these United States. I’m excited to see energy and elevated participation in the Iowa caucuses and in the New Hampshire Primary. Let’s run down my opinion of the candidates, at random off the top of my head. The best part will be at the end when I have to look up whoever I forgot and pretend I have an opinion about them.

1. Barack Obama. I like him. He seems to be a straight shooter with upper management written all over him. I like that I my spidey sense doesn’t tingle with “Plastic Robot!” when I watch him speak. I would like him to be President.

2. Mitt Romney. “Metallic plastic robot!” But seriously, if I were voting for a CEO, I like him, maybe. I did like that the guy was pro-Gay marriage at one time. That’s pretty cool. I nominate him to be manager of my local Fry’s Electronics.

3. Dennis Kucinich. Not a robot, and definitely I could sit down and play some Apples to Apples or Rummy with that guy. I would like him to be my Mayor. He cares about stuff.

4. Hillary Clinton. Oi. TOO. MUCH. BAGGAGE. No offense to the baby boomers, but we need to be rid of their ilk in the Executive. We have a baby boomer in the White House now and it’s been nothing but trouble. Is this ageist? Sure. Tough! I would like Hillary to be my District Attorney. I don’t want her to live in Washington D.C. anymore.

5. Rudy Guiliani. DO NOT WANT. That dude is an opportunistic, xenophobic idiot. Great District Attorney in New York, crappy Mayor. Didn’t screw up things for about a week in September, 2001. Screwed up everything since. The cops and firemen who worked for NYC were screwed. And while sometimes you can tell that somebody’s doing good if their underlings are unhappy, this does not appear to be the case for Rudy. Also, he’s like the Anti-Family man. How many marriages has he screwed up? Who am I to judge, but then, I am not running for President, right? I nominate him for Baseball Commissioner so he can focus on something he can’t screw up too much.

6. Fred Thompson. I nominate him to go back to playing lawyers and Congressmen in TV and Film and please stay the hell away from any government that has any jurisdiction over me.

7. Ron Paul. I like that kid! He or whoever is responsible for his campaign totally get the internet, which is wonderful and terrifying. If It were, say, Ron Paul vs. Hillary Clinton in the general election, I would vote for him. I nominate him as Grand Ombudsman and Constitutional Scholar of the United States. I know the title doesn’t exist — maybe he could work for the Office of Budget Oversight or General Accounting Office. I want this guy checking on the legality of what our crazy stupid government is doing. I also think I’d love to spend an evening drinking beer (or whatever, I’d probably have a shandy so I can keep sharp) with the guy. He’s smart and a little crazy, and I dig that.

8. John Edwards. Kind of plastic, but I like him. He has an emphasis on helping out the little guy that I really like. Unlike everyone else on the planet, I think trial lawyers rock. They’re actually an essential check on idiocy. I wish the court system worked with better speed though. He’s like a character from a Scott Turow — which is apt since he’s a lawyer. I nominate him to represent me personally should I get into legal trouble or become a character in a legal thriller.

Here’s where I’m not sure who I missed. Let’s consult Wikipedia and expose my ignorance to public shame.

9. Mike Gravel. No idea. The fact I’ve not heard of him can’t be good for his campaign though.

10. John McCain. Oh, right, yeah. How could I forget John McCain? I voted for him in the California open primary in what, 2000? I don’t think he’s the President we need. I find his incredible range of views on the current administration, Iraq, and everything else — confusing. I liked him better when he appeared to have principles. I nominate McCain to be my neighbor across the street who tells great stories about Vietnam, Congress, and running for President. I look forward to grilling burgers with the guy.

11. Mike Huckabee. I got a soft spot for this guy. He’s likeable, funny, and makes terribly funny quips on nearly any TV show he appears on. He’s a serious Christian Evangelical, and he’s got a sincere streak of feeling for those who are in need. He doesn’t think the government should be abolished, a switch from most of the rest of the field. If he were running against, oh, Joe Biden, maybe I’d vote for him. But he’s so good on TV. I nominate him to be guest host of the Tonight Show, or perhaps Letterman. I could also see him as School Board Commissioner (but keep him away from the science textbooks!), or, more likely, Governor.

12. Duncan Hunter. Isn’t this guy one of those crook Republicans? Oh, no, I’m thinking of Duke Cunningham. I don’t know anything about Duncan I can’t read on Wikipedia, so I’ll abstain from nominating him for anything.

13. Alan Keyes. I nominate Crazy Alan Keyes to make me giggle at his asinine principled positions. I liked him better when he was harmlessly pundit-ing on political talk shows.

Aaaand… That’s my election wrap up! I get to vote in the February 5th Election here in the State of California. I encourage all twenty of my readers to vote in this election, even if you don’t really think it makes a difference. I think this democracy thing might catch on if more people did it.

This morning I made muffins. This afternoon I had leftover Cobb Salad from Roxy’s Deli. Today’s a pretty good day by food metrics.

Joe Crawford wrote this Saturday January 12th 2008 at 1:55pm That was 13 years ago. The Date 3 comments tags→ leahpeah misc politics

while we’re testing, I have a theory that I’m testing out… Americans are leaning towards candidates who look good and sound good, because we’re starting to recognize that the presidency is really more of a ceremonial office, like the Queen. Rhetoric, grace and appearance matter more than platforms, qualifications and experience. Platforms are promises that may or may not be kept. Qualifications and experience get beat down by the process of governing. We kinda know that the real work of government and policymaking is done by committees and in bills and behind the scenes, and we kinda know that we’re not going to have much impact on that from the citizen level. But the President is our public face to the world, and we care about how we’re portrayed. We want an eloquent diplomat, someone who can repair our image. Like bosses who say “hire for personality, train on skills,” we want a President with a good personality.

btw, Clinton is not the only boomer running — so if you’re going to reject candidates because of their generation, you should reject *all* the boomers, not just the female one. And Duncan Hunter is seriously hawkish.