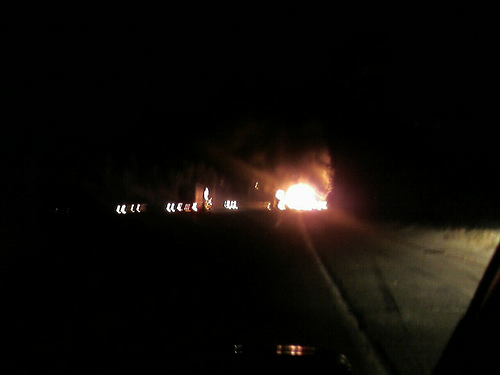 On my way home from Geek Dinner was stopped by big rig on fire on the Westbound 118 in Porter Ranch near Tampa exit. big rig was engulfed in flame and it was supposedly to do with a wrong-way driver, that’s what KNX1070 radio said anyway. It was some impressive fire that actually included the hillside. I actually was with the group of cars that came on it initially and we had to turn around and go to the prior exit.

Joe Crawford wrote this Tuesday March 18th 2008 at 11:16pm That was 13 years ago. The Date 5 comments tags→ fire freeway los-angeles

The westbound side of the freeway was still closed when I drove by it to work this morning (5am’ish).

So this was around midnight, I’m impressed that it was still there five hours later. I was probably a few minutes off from being part of a bad accident. Scary.

The LA Times has a story:

“Authorities say a wrong way driver caused a fiery crash that has killed a motorist and shut down a freeway for hours in the Porter Ranch area.

“Police say the crash on the westbound Ronald Reagan (118) Freeway happened at 11:35 p.m. Tuesday when a vehicle crashed head-on into a tractor-trailer east of Reseda Boulevard. The big rig burst into flames, along with an SUV.

“Before emergency crews arrived, explosions rocked the burning trailer truck and fire raced through brush on the northern embankment.

“Dozens of motorists, who moments before had attempted to pass the burning wreck, turned around and fled driving the wrong way on the freeway to escape.

“At least three vehicles were involved in the crash.

“Authorities reopened the eastbound lanes of the freeway shortly after 5 a.m. The westbound lanes remained closed.”

Wow. It looks like they re-opened the eastbound side right before I got there. Damn them. A closed freeway means I would have stayed home… :/

Being close enough to grab that pic must have been “interesting.”

But on the plus side, it sounds like you’ve used up some bad karma and there’s smooth driving ahead for you.

yeah, okay, I know that makes no sense… but it’s mind of matter. I have no mind, so the traffic doesn’t matter 😛

I saw the Twitter from the LAFD, but didn’t even think that you might still be headed home at that time. It sounded like a major accident and now I see that it was. 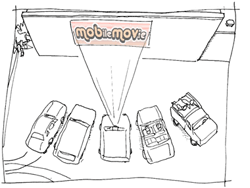