I’m not sure how many of you have fond memories of the movie Tron, but I do. I recall going with my uncle to some office to play “Adventure” — an early (1983) text adventure game. My uncle was friends with various folks in electronics manufacturing in the early 1980s in San Diego. So I remember one of the guys pointing out a computer — something running PDP-10 — they they said “was the computer they used to make Tron.” I was highly impressed. I think I thought it was the computer, but I think they meant that it was running the same software as the creators had used. The Tron wikipedia page indicates that the machine they used was the Super Foonly F-1.

I had used computers already. In Grade 8 at School of the Madeleine in San Diego we had an Apple II Plus. I think mostly we were allowed to play Oregon Trail as a reward for finishing something early. This is indeed how I know what it means when someone has a t-shirt that says “You have died of dysentery.” I also remember writing the most basic of Apple Basic programs. GOTO and PRINT and maybe some basic LOOPS and IFs. Nothing I remember terribly well.

It was also in about 8th grade that (thanks mom and dad!) my parents bought me a TI-99/4A computer, which I loved and was I wrote about ten years ago. I had a lot of fun with that machine and it was when I first started programming.

I even drew that machine for a drawing class in 9th grade. It’s a study in perspective, but really, the subject is that computer. All the details are devoted to the computer. I could care less about the rest of the room: 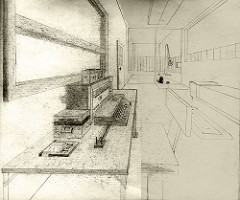 Back to Tron, On Drawn! Cartooning and Illustration Blog I saw an excellent stop-motion animated short film of a short sequence from Tron. It’s super!

Aside: Super Foonly F-1 is the coolest computer name I can think of.

So here’s how funny memory is. I titled this post before I started writing it. In my memory Clifford Stoll is linked tightly to my early experiences with computers. I imagine myself having read his exciting book The Cuckoo’s Egg when I was perhaps 15 years old. In truth, the book did not come out until 1990, so I was twenty. Funny, memory. Stoll was and is a hero of mine. It was his writing about telnetting from machine to machine that I really understood how the internet worked. Granted, I had had experience going on BBSes when I was 15 on my Amiga, and that helped. But Stoll was adept at describing this nowhere space — of having accounts on different systems, and of pretending to be other users — it was every vivid in my mind. Of course, I had Gibson‘s “matrix” in my mind too, but that was fictional and quite fanciful, and clearly impossible with the tools we had at that time (1984, when I read Neuromancer).

I was delighted to see this video: Clifford Stoll: 18 minutes with an agile mind show up in my podcasts:

I remember Clifford Stoll appearing on some PBS show in the early 1990s and he would not sit down and sit still. Unless I’m making this up, he sat in the chair by not sitting — he was crouching, feet on the seat, on the chair. I disagree with most of his thoughts about computers and kids, but I’m also aware he’s a wise man with smarts like crazy.

As with all my childhood heroes who are still alive, he has a home page. I dig the simplicity and the priorities that shows.

That’s a piece of my story of being inspired to use computers. What’s your story?

Joe Crawford wrote this Tuesday April 1st 2008 at 6:25am That was 13 years ago. The Date One comment tags→ computers drawings graphics nostalgia scifi

Tron holds a special place in my memories as well. So much so that I felt compelled to take Gideon to the store, buy the anniversary edition of the DVD, and explain to him (painfully from his perspective I’m sure) why this movie was unique in its production (there will never be another movie like it, I am convinced) and historic in terms of CGI development. I also have vivid memories of playing the Tron video games.

Click here to cancel reply.
Something from The Onion
Twenty Year Anniversary