Two iconoclastic thinkers who I think would usually disagree (Barnett is an optimist/realist; Kunstler is nearly apocalypticist) are in complete agreement! This is a nice surprise.

Barack Obama caught hell last week for daring to tell the truth about the ragged thing that the American spirit has become. He said that small-town Pennsylvania voters, bitter over their economic circumstances, “cling to guns or religion or antipathy to people who aren’t like them” to work out their negative emotions. He might have added that the Pope wears a funny hat (see for yourself this week), and that bears shit in the woods (something rural Pennsylvanians probably know). Nevertheless, in the manner lately prescribed for those who slip up and speak truthfully in public (and in contradiction to the reigning delusions), Obama was pressured to apologize for his statements.

The evermore loathsome and odious Hillary Clinton, co-owner of a $100 million personal wealth portfolio, seized the moment to remind voters what a normal, everyday gal she is — who would never look down on the small-town folk of Pennsylvania the way her “elitist” opponent had — forgetting, apparently, that the Clinton family’s consigliere, James Carville, famously described the Keystone State as a kind of redneck sandwich with Pittsburgh and Philadelphia as the bread, and Alabama as the lunch meat in between.

As soon as I think Obama’s pandering too much on economics, he says something this blunt and wise. Of course people get nasty and scared and cling to old shibboleths when they’re feeling vulnerable on economics! That’s the entire history of our country. Read Benjamin Friedman’s brilliant Moral Consequences of Economic Growth.

How either McCain or Clinton try to pass this off as “elitism” is just goofy. Obama’s problem is that he’s a lot more honest than either of them. He sees the world more accurately, and when he speaks truth in that direction, he gets chastised by the Boomers with their quintessential ideological view of things.

Joe Crawford wrote this Monday April 14th 2008 at 8:43am That was 13 years ago. The Date Leave a comment tags→ economics politics thomasbarnett 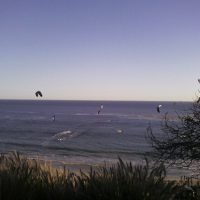 Beach Time, Not Quite
Breakdancing Kid on Mr. Rogers