It was warm yesterday. I went to the beach late in the day but the water is 56 degrees F. The lifeguard says it doesn’t get into the 60s until June. I now know 56 is too cold for me now, my calves were instantly numb, and not in a good way. Hypothermia is not how I want to start out ocean-swimming.

I have investigated the wetsuit angle and it’s not for me. Too expensive, too restrictive. Perhaps that’ll change at some point.

I did see that they put stones, probably anti-erosion? On my beach Thornhill Broome. I really didn’t like the way it was breaking on the stones there. I’m not sure who I would ask about why and when the stones were placed. California Coastal Commission? State Parks? It is part of Point Mugu State Park. I’ve no idea who has ultimate jurisdiction and responsibility to add those rocks. It seems to me that someone put several tons of rocks on that beach, and the fact that I can’t find a public record of it is vexing. I’m sure it’s simply due to my ignorance of where to check. 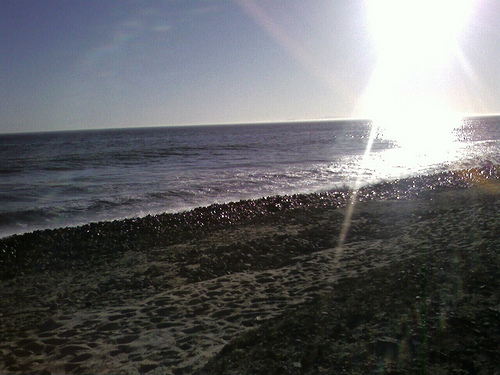 So I went further south and just as I crossed the L.A. county line I saw a mess of kiteboarders: 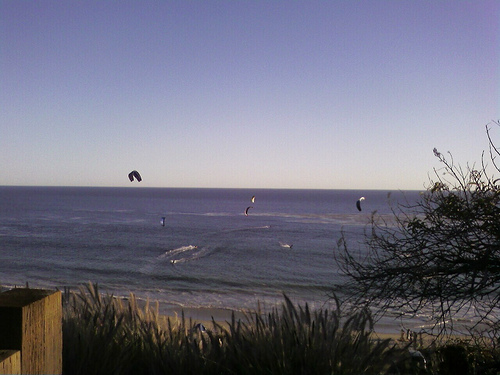 I went further south, past Leo Carillo further south and went in near Guernsey Avenue. The lifeguard kid I talked to was affable and jokey. I was encouraged to see a chalkboard with the conditions. The 56 didn’t scare me off till I felt it.

There were a few dozen people dotting the landscape. Mostly people sunbathing or just chilling. A lot of people were taking photos of the impending sunset, hoping for a postcard shot, no doubt. After a bit of walking in the surf I went home.

Joe Crawford blogged this at 7:34am in 2008 in April. The 14th was a Monday. You are reading this 12 years later. Comment. There is one comment Tweet. Send email. It has hashtags→ beach swimming . The Date

←Lyrics of the Day: Heidegger in Harlem Barnett and Kunstler on Obama’s Impolitic Words→