via tony pierce, via laist, via banned bikes.

As a sometime 405 commuter, I’m amazed at what the the *motorcycles* do, let alone what bikes could do.

I wonder what science fictional scenario gets the 405 freeway repurposed for bikes. Maybe $10/gas?

Update: Banned Bikes has an update post — Freeway Aftermath, which points to the thread on MetBlogs which has some historical background on bikes in L.A., among other things.

Joe Crawford wrote this Wednesday April 23rd 2008 at 9:00am That was 12 years ago. The Date Leave a comment tags→ bicycle commute scary 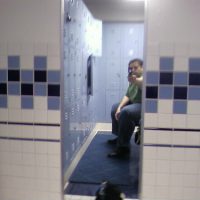