Sometimes, drafts of posts sit in “draft” mode for a long time. I drafted this in August of 2008, a year and a half ago. I’m updating it as best I can and pushing it out into the world.

For the past two years, my wife Leah has attended the main BlogHer Conference.

The first time she came back, she was utterly exhausted, physically and emotionally. After the 2006 one, she vowed not to do any panels or interviewing because they are just too tiring. She also wanted me to come along. It turns out I am helpful to her when she’s riding the whirlwind like this. That’s fair, because I get the same sustenance from her. When 2007 came around, we were not financially fit enough for me to come along to Chicago, so she went alone, and was again completely spent at the end of it.

But 2008 was different. We’d paid off much more debt, had some emergency savings (though not much) and the conference was in San Francisco, so we could drive. We decided on it and when July came around it really looked like both of us could go.

So I went. I got the “cocktail party-only” registration. She attended both the panels and the cocktail parties, but was not doing a panel or minding Amy Sedaris. I had a great time meeting people, but my emphasis was really on exploring San Francisco as lazily as possible. In this lazy jaunting, I was successful. I met cool people galore. Much more happened than I can hope to relate, but here’s a shot.

We started for San Francisco on a Thursday. Of course, as has been the trend that Summer, the air conditioner broke and so we were delayed waiting for the repairman. We had intended to leave in the morning but ended up leaving after noon.

We got to San Francisco and the Westin St. Francis on Union Square before the introductory cocktail parties started. We were on time despite having been delayed.

I enjoyed the drive. We drove north on the 5 Freeway, which is inland. Most people love to drive along the coast, and I do love the Pacific. But the inland route was beautiful. I cannot quite put my finger on why I got choked up after dropping down into the San Joaquin Valley and getting through the Grapevine. What I twittered was: “Fresno county. There’s nothing here, but I find it beautiful. Leah finds it unremarkable. Not sure what my strong emotional reaction’s about” — and Doug Welch replied on Friendfeed: “For me, it is the simple relief from the “crush” of the city. Open space is a balm for the soul.”

That may have been part of it. I respond to water–The Mighty Pacific–that way. I can get the same relief from swimming though, even with the big city about. I wonder if the past two decades has short circuited my sense of patriotism, and my psyche is compensating by becoming patriotic for the idea of California. It’s often said, usually by Californians, that if California were an independent nation, we’d be the the seventh largest economy in the world. I wonder if California is a suitable patriotism substitute.

So we checked in at the Westin. Almost immediately Leah started running into people she knows or blogs with or reads and it was a bit like me at a WebSanDiego event in 2003. Everyone knew her. They were delighted to see her. I was “an appendage” but I felt very welcomed. BlogHer is super-social, and the hotel was filled with women connecting and reconnecting.

And that’s pretty much where I ran out of steam. From there it is all a blur of people and places.

Some highlights, at random.

I met some really cool people: Oh, The Joys is a blogger from Georgia. She’s a great conversationalist and we talked about blogging, blog comments, and how intensely folks can ascribe meaning to who is or isn’t commenting at any one time. Here in 2010, I’m just happy I get to read her blog.

Avocado8 I met at some mixer thing, and we immediately could talk JavaScript and web development. She also has bitchin’ hair, which Leah wanted a photo of so she could have her hairdresser try it out. It was tricky, because it was pretty dark inside that first mixer location. 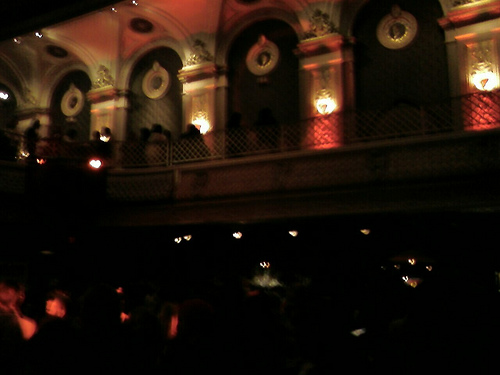 Abigail, from OC, I already knew but I really enjoyed her company. I think we all shared a packed cab on the way to the Mighty Haus party at Adaptive Path. She was pretty great at adding to the whiteboard when I started an impromptu “exquisite corpse.” Actually, the MH party was good all around, there was also dancing and music and lots of great conversations. I remember talking to blurbomat about theoretical “Black Hat BlogHim” topics. We cracked each other up with jokes like that. Well, I was cracked up, perhaps Jon was humoring me. You can also check out his Thoughts on BlogHer 2008, where he talks about much deeper things than I realized he had going on when I saw him. It’s a worthy read.

Here’s a photo of part of the exquisite corpse whiteboard: 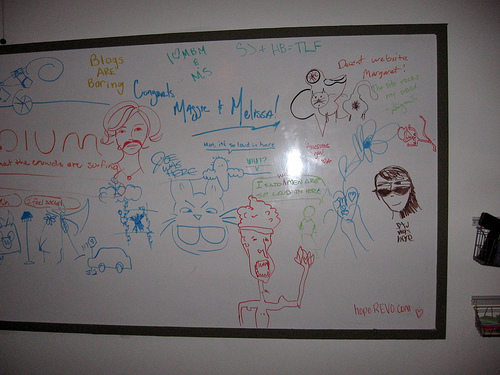 Whoorl was charming and funny. I can’t remember if I had already met her in SoCal or not, but her blog is also worth reading. Great stuff. I also got to meet Uppercase Woman, who was really cool as well. I can’t remember if she was at that first Mixer or the MightyHaus event though. Sorry about that.

Oh, and Ingrid. I worked with Ingrid in San Diego and it was awesome to see her. She’s a great person, a great developer, and a great manager. Definitely one of the nicest people I’ve ever met. She lives in Boulder now.

Also from Boulder was Andrew Hyde, a very interesting cat and man-about-web–he was along at a breakfast we went to down near where Al Abut lives. I forget the area, but it was pretty good.

I also got to have lunch with Paulo at Il Palio, and it was great. It was great catching back up with him. I knew him from the very earliest days of websandiego, I want to say about 2001 or 2002. He was always partly NoCal and SoCal, but he tears it up in web development up there.

So I explored San Francisco when we weren’t socializing. I went lots of places, on foot or on the bus. It was a fun adventure, and I even took a few photos.

Isotope Comics was by far the best comic book store I had ever been in. I was turned onto Scott Pilgrim there, and for that I am eternally grateful to James Sime, the larger-than-life proprietor. I still follow him on twitter, where his bio currently reads:

That dude is cool.

I also went to Action Figure Freddy, which apparently has now closed. I took this shot of the giant, sexy, anime-style Princess Leia in the window. 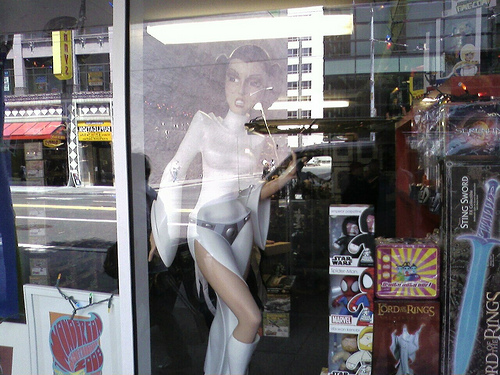 Also, there’s also a great bookstore: Bibliohead. And landmarks Coit Tower and Lombard Street. I took a lot of photos of the Coit Tower Murals and did mention them before. I also took the Muni partly to get around. It was fun to explore on foot. Driving in San Francisco is a bit of a pain. Well, the driving is actually fun, but the parking is a bitch. Another thing I did was go see the recently released Dark Knight at Metreon, which was cool, but not as cool as the name might imply. Across town, I ate at Lou’s Pier 47. Great cajun food, and some live music too.

There was even more. It’s a pity I didn’t get to do everything in the excellent suggestions my blog commenters had. But I had a wonderful time, regardless.

Joe Crawford wrote this Monday February 22nd 2010 at 5:00am That was 11 years ago. The Date 6 comments tags→ blogher memories San Francisco travel

Wow time flies. It was great seeing you on that trip – when are you heading out this way again?

The area we were at was Church & Market, near my Mission Dolores hood, and the place we ate at was Chow’s.

Thanks Al! Yeah, it was a great time. Wish I’d completed this blog post months ago!

Not sure when the next time will be. We’re sort of hovering these days. 🙂

It’s so funny, but did I know you were Leah’s husband when we met? Cause we just connected at Mom 2.0, and she is so spectacularly awesome, I should have KNOWN. 🙂

Glad you remembered me at all!

Cecily, I don’t know–that part of the introduction must’ve gotten missed. No harm, no foul. We all had a great time even if we didn’t all know each others roles. 😉

Heather! Hah! I had no idea. Yes, definitely on the “to be rectified” list.

I was there, although I don’t think I met you or Leah… and now you’re here! In my town! And I still haven’t met you… or Leah…