Measuring weight loss with a belt

I don’t have a scale handy that is capable of giving my weight, but I’m skeptical about whether that number is meaningful anyway.

What is meaningful is the amount of belt I could be using. It looks like about 6 inches (a little more than 15 cm) of loss on my waist in the past year or so. 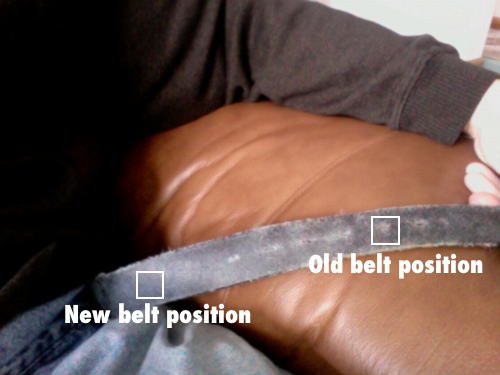 MAS, has a post about his skepticism of Body Mass Index. Hugh Jackman and Mike Tyson at his peak would measure as “Obese” according to the BMI, basically. In that post he cites The Frankie Method for measuring leanness. Frankie was a trainer at a former gym of MAS, and his measure was: “Can you see your abs? If no, then you are too fat.” My answer to that is still no, but I can see the outlines of where they will be.

I made a diagram:

criticalmas diagram health photos weight
Joe Crawford posted this 13 years ago.
What else did he post in February 2010?
The Date

The Frankie method is ridiculous, but true.

Joe I agree totally, you can’t be healthy when you are obese, but if you are lean, that does not mean you are healthy.

I updated the flowchart, since leanness does not automatically imply “healthy” – people in a famine, anorexics, and the sick may have abs to show, but health is not the thing, it’s simply, “not fat.”

Love the flowchart. I am working on a post that describes a metric that provides more guidance than the Frankie method and gets around the problems of using BMI.

TPM Barnett on social networking technology
The Sky Above The Port