For some reason this video–Fancy by Reba McEntire–has stuck with me as a kitsch cheese masterpiece since I first saw it maybe 20 years ago. The song and I think the video too were released in 1990. It is over-the-top melodrama and until I looked it up, I had no idea it was a cover of a song from 1969, by Bobbie Gentry.

For some reason the refrain:

Here’s your one chance Fancy don’t let me down!

…has become a funny line I can amuse myself/annoy myself (and my wife) with. I may have had the song on my iPod as a joke at one point. I don’t have it anymore. Too much annoyance now. But whenever I see Reba or am put face to face with melodrama, I think of it. It’s like an avatar of earnest, outlandish bathos.

And now I have inflicted it on you, should you choose to watch or listen to it.

Joe Crawford wrote this Friday January 14th 2011 at 10:45am That was 10 years ago. The Date Leave a comment tags→ music video 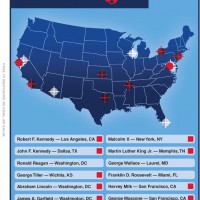 The Power of Graphic Design: Politics
Memorial in Arizona