So here’s a photo from the room I’m staying in at Grandma’s house: 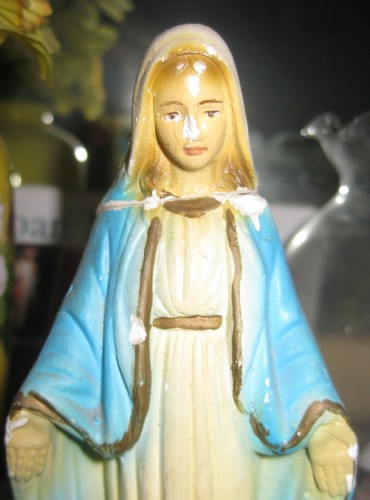 And here’s a photo, maybe a year or so old, of my Grandmother: 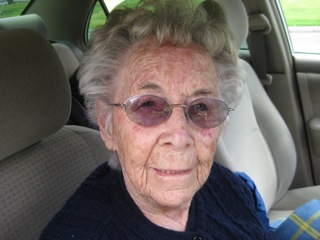 On Friday I opened an account for her on Facebook. She used to be an avid emailer. In fact, her email addresses was one of the first I used, on AOL. Unfortunately it’s gotten harder for her to do email–sitting at a computer is a bit of a chore–her vision and motor skills are not as great, and her email account (on Yahoo!) only provides a web interface, which is fairly clunky. Facebook may be a middle-ground for us here. So the other day I printed (yes, printed out) her Facebook messages. She had some responses to the messages. I acted as her personal Facebook Secretary–I’m a Social Media Expert!–and transcribed her short reply.

I’m not really happy with this solution, but I’m hoping to get my hands on an iPad for her to try out at the beginning of April see how well that interface might work. The typing is a problem though. My Uncle actually set up a voice recognition program on her Windows XP machine (still running IE6!) some years ago, but that’s yet a different brand of clunky. Add to that that her hearing is poor and she’s quite a challenge for a UI designer.

She’s a nonagenarian now, which is a fancy way to say she’s 90 years old.

I’m sorry, I got myself off-track with that digression. I meant to write about what it’s like to stay in her house, with a pile of things that have emotional weight for me. I’ve included a photo above of one thing. That is a photo of a statue of Mary. Oh, who’s Mary you ask? In Christian teaching, Mary is the mother of Christ. Catholics, I think above most other Christian sects, hold Mary in very high esteem. Marian prayer features prominently in the Rosary, for example. I remember my Grandma and her friend telling me when I was a kid of how praying the Rosary would eventually stop communism. Here in 2010, with the lone holdouts of communist thought being North Korea and Cuba, I have to say Mary did a pretty good job.

The statue is one I purchased. I must’ve been 8 years old, and I bought it in the Philippines, specifically for my Grandma, because I think she would like it. Unfortunately during our travels back from Manila, it was damaged, but with help from my Mom I managed to glue the head back on. The thinking behind the purchase was a nice gift for my Grandma, of course, and she has kept it in her house for the last 3 decades. I think the blue of the statue is still beautiful. I loved totems and statuary as a kid. Religious iconography and architecture still has the power to move me, no matter the religion or sect.

Thinking back to the kid I was, I am fascinated by my serious-mindedness and devotion to Christ, and Mary, and the infinite magisterium of the Holy Roman Catholic Church. I have waxed and waned and even abandoned that Church to varying degrees in the intervening years. But the linkage to family the Church made for me has not declined. I was very excited to know that the Eucharistic Minister would come for my Grandma yesterday. And I am encouraging to her to be well enough to travel to Mass sometime in the future when she is more mobile.

Of course, for me, these days “mobile” has a whole other meaning. My dad now has a smartphone and he texts, texts! me from the road and on a regular basis. Leah and I are highly mobile right now. I’m playing Words With Friends with varying degrees of frequency with the kids. I find myself pulling out my Mom’s iPod Touch more and more to play with Brushes, even if it’s only for a nothing sketch like this one: 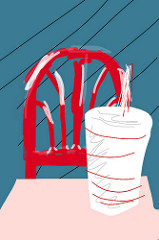 I’m not sure I have a coherent theme for the words you are reading now. I suppose I could talk about the Catholic Church’s mobile confession app, but I don’t know that much about it. In the meantime, I suppose I better get some work done, and perhaps listen to The Beatle’s Let It Be, from which I stole the title of this post–well the line is actually “Mother Mary Comes To Me” I think–but I prefer my mishearing. Let It Be was made at the end of The Beatles career, as they were about the break up. It’s about accepting the end of things. And I’m learning to come to terms with things, and move forward myself.

Always love when you post. What a sweet story about the statue. Thinking of you guys lots. xoxo 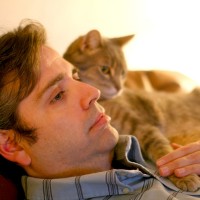 Bas and Me plus Grief
I only made this because Claire de Lune is a COFFEEHOUSE with no WiFi. 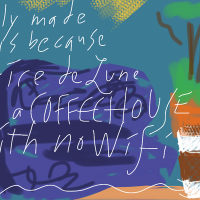