So I’m back in San Diego. And part of my identity when I lived here was starting and cultivating the websandiego mailing list. It started on ONElist, and they were bought by eGroups, and eventually Yahoo! where it is now. It all started in March of 1999.

We’ve moved from Usenet and Friendster to MySpace, and now to Twitter and Facebook as mechanisms to connect people. We call these tools “social networks.” And they are tools, just like classrooms and families and co-ops and governments and companies are tools. The Social Network is just making slightly more portable the connections we make in life.
Social networks, including the ancient listserv, embody social connection while also accomplishing other tasks. The intent of WebSanDiego as a mailing list was to foster connection among people who make things on the web. Here’s the constitution I established, lo those many years ago:

WebSanDiego is an unmoderated mailing list for San Diegans and others in the area who work on the internet in general and on the World Wide Web in particular. It’s a place to ask technical questions, discuss current design issues, speak about business, judge new servers, talk hosting and ISPs, or just plain talk about the fast forward world that is the WWW. You can share your time-saving tips, HTML tricks, share URLs, ramble, rant, n’ rave, and generally talk about the web! The web is supposed to be about community, so why not let web developers learn from each other? This is THE List for the Web in San Diego.

When I lived here I truly lived the list. I took it as a component of my personality. The successes, friends and colleagues I still have in San Diego are attributable to the list.

In January of 2005 I moved away. My activity on the list diminished as I faced other challenges in my life.

In September of 2007 I left the list. Obviously my activity ceased then.

So I was curious about the list, and what became of it. Would it be worthwhile to join the list for me? What’s happening? Well, there’s less traffic. All questions can be answered, whether well or poorly, with a visualization. So here’s a visualization of list traffic from 1999 to now using the number of posts counted on the Yahoo! main page. 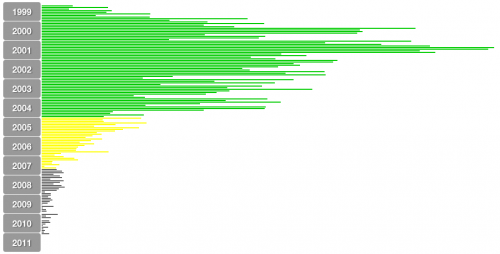 Here we are, 12 years after its founding, and I have rejoined the list. I am not an administrator of the list. Just a member. I’m not sure how much upside there is for a list like this now. We have twitter, and Facebook, StackOverflow, Meetup, and the excellent http://www.sdtechscene.org/ which shows San Diego has interesting tech and programming and web events nearly EVERY night.

I have no idea what happens next.

Thanks for your attention,

Joe Crawford wrote this Tuesday March 8th 2011 at 3:15pm That was 10 years ago. The Date Leave a comment tags→ screenshot visualization websandiego 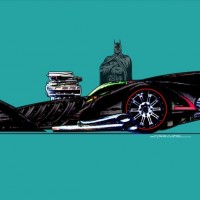 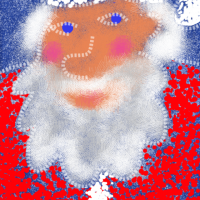