There could not be more news, and there could scarcely be fewer bloggers

“Nobody goes there anymore. It’s too crowded.” ((Yogi Berra))

Perhaps it’s time to quote some Ronald Reagan, as I did on this very forum 10 years ago:

“You and I are told we must choose between a left or right, but I suggest there is no such thing as a left or right. There is only an up or down. Up to man’s age-old dream — the maximum of individual freedom consistent with order — or down to the ant heap of totalitarianism. Regardless of their sincerity, their humanitarian motives, those who would sacrifice freedom for security have embarked on this downward path.” ((Reagan, 1964))

The speech that came from was more about the worries of a welfare state and statism in general. But that nugget has a truth about it. The recent revelations of constant surveillance of Americans’ cell phones and internet traffic worry me. This is simply “signals intelligence” of course and in principle is a good thing. It’s the kind of data mining we’ve all grown used to. Devices which track our movements all the time. Debit and credit cards have done this on a more rudimentary level for decades: each transaction is tracked and stored. A record of my card use is a record of where I have been. We carry cell phones in ever greater numbers. More people have access to mobile phones than working toilets ((United Nations, 2013)). And with phones, comes GPS tracking and cell tower triangulation. If my phone is on, it is maintaining those “5 bars” of service by talking to cell towers and all of that data is stored. All the time. It’s trivial to keep all this data. And we accept it.

I happily use Facebook. When my mother was in the coma that preceded her death, Facebook was invaluable for keeping in touch with relatives for whom email was too infrequently checked, for whom phone numbers had changed, for whom texting was inadequate. I used it to coordinate flights, give out news, seek solace, share photos, share thoughts, private and public.

But Facebook and like systems are doing the same thing the credit cards and phones are doing. They track what I do and where I go, and what I think and who I am with. Who I have been with, who I marry, who I date, who my family is. And we happily submit to this surveillance because it comes with a concomitant value. I get a substantive value from being able to share photos asynchronously with my family. What’s the alternative to sharing photos with 50 or 100 people? I could go spend $500 to print and mail photos to my family: all geographically remote: or I could do the same thing by posting onto Facebook at the cost of my internet service or phone service and a bit of my time. Oh, and at the cost of Facebook’s systems learning a bit more about me.

And it is Facebook’s computers, by and large. And now the news is that more and more government computers are doing the same. It’s machines that are learning more about me. We call it learning, but it is a sadly blunt tool. In 2002 I read something that had a big impact on me about collecting mass data. In 2002 I linked to it. I’ll include it entirely for my purposes today, because it was talking about the “Total Information Awareness” program the government was purportedly working on at the time.

A few months ago Anil Dash reminded us all that at one time we, the people of the web, roundly rejected single sign on schemes no matter their utility:

In 2003, if you introduced a single-sign-in service that was run by a company, even if you documented the protocol and encouraged others to clone the service, you’d be described as introducing a tracking system worthy of the PATRIOT act. There was such distrust of consistent authentication services that even Microsoft had to give up on their attempts to create such a sign-in. Though their user experience was not as simple as today’s ubiquitous ability to sign in with Facebook or Twitter, the TypeKey service introduced then had much more restrictive terms of service about sharing data. And almost every system which provided identity to users allowed for pseudonyms, respecting the need that people have to not always use their legal names.

Tim Bray wrote recently about the resurgence of the blog ((Blogginess)). Well, if not the resurgence, at least the utility and expressiveness of the blog. Blogs at their best are not in the clutches of these third parties. The blog you’re reading this on is self-hosted, backed up, and not censorable by Facebook. But of course, the network effects of the social networks are powerful. But I think lone voices still have a chance to change minds. The thing of course, is that now we partly measure influence in terms of number of likes ((Facebook)), retweets ((Twitter)), reblogs ((tumblr)), reshares ((Google+)).

There is no decentralized repository of influence.

If you have an hour, listen closely to Anil Dash’s talk on The Web Web Lost. He makes compelling characterizations of these spaces we’ve all agreed to participate in, and how these spaces do not have the same free speech rules. Which is to say, they are not as free. Here’s where I’m tempted to quote Patrick Henry ((I’ve been known to before)) but the truth is I want to have freedom entirely, and I also want to participate in these walled gardens.

And right now I am feeling the tension of not being able to unravel the contents of this omelet of freedom and less-freedom.

I doubt any of this was coherent, but I’ll post it anyway. I reserve the right to revise and extend my remarks.

blogging politics
Joe Crawford posted this 10 years ago.
What else did he post in June 2013?
The Date

I like this. Thanks for keeping some useful discourse flowing! And for being one of the watchful eyes needed to keep this country “great.” 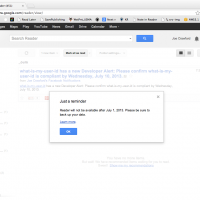