“I wonder if anyone is reading this”

I have been wondering about my audience for this blog for a long time. As a reminder, I’ve been posting material here since 2001. 2015 marks 14 years of postings. Lately it seems it’s mostly a republishing platform for my Instagram photos because of my distrust of providers of internet services.

Here’s a header I made in 2001, back when the blog part was still hosted on blogger, wondering if anyone is reading this.

So at least I’m consistent.

The other day I tweeted to avocadoh8 in response to her blog posting: DOES ANYBODY BLOG ANYMORE?. Here’s a small excerpt.

It was only when I saw the caption on an Instagram photo of one of my contacts, recently—a person whose blog I used to read regularly—mentioning that she’d blogged for the first time in a long time, and then a follow-up comment that said, “It’s rare that I go check out blogs anymore…” that I realized that a tipping point had been reached, and non-blogging might be A Thing now. Not even a thing we all complain about, as we used to (“I’m way behind on my blogging,” yadda yadda), but just A Thing. It reminds me of that scene in When Harry Met Sally when Sally says something about her friend who complains that now that she has kids she and her husband never have sex anymore, and then she says, actually, now that I think about it, she didn’t even complain about it.

In reply I said:

@LoriHC re: http://t.co/OCqlnJPs2x it's also about the death of Google Reader. GReader was an awareness catalyst. Harder to RSS these days.

I place a good deal of the blame for the lack of blog interaction on the death of mainstream RSS reading, which is to say, many people became reliant on Google Reader and when it shut down, we no longer had that connection to a wider network. I could follow the RSS of friends, of enemies, of things I was vaguely curious about, without the hassle of “friending” or “liking” them.

These exogenous entities: sometimes people, sometimes companies, aggressively solicit me to “FOLLOW US ON FACEBOOK.” And that’s all well and good. But what if I’m only mildly curious? What if I only want to dip my toe in? If I like your page or follow you on twitter, am I not signaling something?

There’s a thing that I hear people complain about on tumblr and Instagram. Basically a person starts getting notifications that a certain account starts liking things of theirs. They like lots of the complainers things. There’s that button with a heart on it, and they click it like mad. They are signaling their appreciation, or something. But because of the notification systems on these applications, it looks like obsessive interest. It reads as stalking. Which is creepy. People sometimes call this “creeping.”

I do a quick search for “instagram creeping” and I see a question that reads like this:

This is a strange culture, isn’t it? We’ve created such a highly engaged and interactive array of systems that we are now afraid to use them. We’re afraid because we don’t have the option, usually, to “secretly” like something. When I’m reading your instagram I’m conducting surveillance. I’m gathering sensitive information about you. Even when I’m posting to instagram I’m conducting surveillance. If you reply or like my photo I know you’re on your phone. Same thing on Facebook. There’s no latency to take time and think.

My tweet to avocadoh8 was in response to a few-days-old blog posting. It was not immediate. It’s the same as the instagram-surveillance panopticon really, just a bit slower and more manual. But I had time to think about it.

I’ve been working on this blog a bit in the past month. I’ve been altering the code. Improving it incrementally. Yesterday I added improvements to how it looks if you’re reading it on a phone. I’m trying to make it better for me. Readability. Usability. I do this for me because I view artlung.com as a representation of my creative output and it’s gone fallow for about 5 years. I also do it because it helps me learn things. It tunes my skills. SASS and as usual WordPress are things worth getting better at.

But it is in service to surveillance? Is all my internet work about that now? The gathering of information about users in order to sell to them, to monitor them, to control them? I’m being grandiose of course: I LOVE seeing photos of my godson on Instagram. It gives me great joy. But there are things very rotten about how we deploy these systems. And as I lamented about surveillance by the US government in post on New Year’s: so too I begin to wonder about what information we allow to disseminate inside private entities and to our friends and not-friends.

It feels good to reflect and write.

It feels less good to reflect and see things that are worrisome.

And we can change these systems to serve us.

google reader instagram misc rss surveillance
Joe Crawford posted this 7 years ago.
What else did he post in January 2015?
The Date

At first I was irked by the the loss of Google Reader, then I was comfortable with Feedly until they started delaying feeds until you pay a premium, then I did just a little more work and got all my feeds into Inoreader. Now I’m better off than ever with access via Chrome, Android, iPad. However, aside from my regular, somewhat commercially supported reads, I’ve noted the lack of activity of friends and former colleagues.

In this fallow moment I’m STILL, since 2001, considering that I should BEGIN writing for the web in earnest and I look to folks like you Joe for inspiration and motivation.

As to surveillance: I continue to have a concern that I couldn’t really write as I’d like to as Justin, without a pseudonym, without self-censoring, saying yes whimsy, changing persona, indulging in crass and cranky behavior, without risking something professional or personal. I take seriously my freedom as an international traveler and nomadic artist, and pay careful attention to stories of those detained at borders for their contrary positions expressed online.

I scroll past most image posts unless the headline grabs me. I read all your copy.

I’m on Instagram but I don’t browse it at all. Facebook is now my Craigslist/Meetup/EventBrite, used almost entirely for event notifications, housing, group organizing, and the occasional msg to someone who doesn’t check email anymore. I’m on Twitter but don’t interact with it at all.

Enough about me. If you write, I’ll read. Thank you very much. 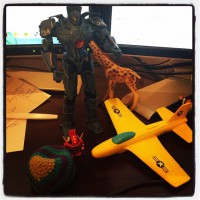 I need a lot of different stuff on my desk this week.
I ordered regular black coffee. I am delighted by the inclusion of this heart. A++ 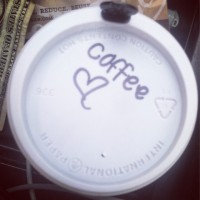