On September 15, 2018, I attended a panel discussion about Kaiju vs Heroes at the Japanese American National Museum in Little Tokyo in Los Angeles. The exhibition was terrific and inspiring. My enthusiasm for robots, specifically toy robots, and especially Japanese toy robots from the 1970s originated when I lived as an expatriate kid in the Philippines as a kid. Voltes V was a special favorite. To see an exhibit from an American kid whose brain likewise caught fire with a love for Japanese toys. Kaiju are great too, but for me it’s the robots. Giant and small automatons with personality, or giant mecha driven by heroic men women and kids, saving the universe. The inventiveness of those toy robots was astounding. My admiration for all things Japanese when I was in my teens originated in these toys.

Here are my paltry sketchnotes from the day.

The exhibition runs through July. If you visit Los Angeles, see it! 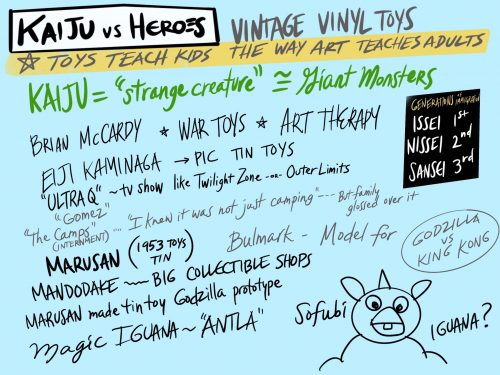 Here’s the description of the panel discussion:

In conjunction with the opening of “Kaiju vs. Heroes: Mark Nagata’s Journey through the World of Japanese Toys,” toy designer and collector Mark Nagata and Marusan toy company President Eiji Kaminaga will participate in a discussion about kaiju toy history, the world of Japanese toy collecting, and their companies’ histories (Nagata is the founder of Max Toy Company). The Marusan toy company created some of the first vinyl kaiju and hero toys of the 1960s and these toys make up a significant part of Nagata’s collection.
The conversation will be moderated by Brad Warner, who worked for 15 years at Tsuburaya Productions, the makers of the “Ultraman” television shows. Warner is now an author and teacher of Zen Buddhism.

Following the discussion, Mark Nagata will sign copies of “Toy Karma,” an accompanying book by and about Nagata, as well as a 13″ x 19″ print (10″ x 17″ image size) featuring a kaiju and hero image by toy photographer Brian McCarty, who will also be signing the print. The book is $24.95 and the print is $50. Both can be purchased the day of the event.

Here’s the description of the exhibit:

With mighty fangs, menacing horns, and iridescent gold scales, the lizard monster Drazoran crushes an imaginary city while Captain Maxx, wearing a bright red suit, flies in to save the day. Drazoran and Captain Maxx are two of the monsters and heroes that emerged from the creative mind of Mark Nagata, a toy designer and fervent toy collector. At JANM, Drazoran and Captain Maxx join hundreds of dazzling vintage and contemporary Japanese vinyl toys on display in Kaiju vs Heroes: Mark Nagata’s Journey through the World of Japanese Toys.

In California in the 1970s, Mark Nagata was living an all-American childhood. When he was nine, an aunt and uncle serving on a US military base in Japan sent him a box filled with colorful figures packaged with art-laden header and backing cards featuring alien-looking beings—kaiju and heroes—engaged in battle. These Japanese toys would eventually change Nagata’s life forever. That seemingly simple gift sparked a passion for Nagata that continues this day. Those toys and the artwork of their packaging inspired him to study art, to zealously collect vintage Japanese vinyl toys, and to become a toy designer himself.

Kaiju translates to “strange creature” in English but has come to mean “monster” or “giant monster” referring to the characters that became popular on Japanese film and television soon after World War II. The anxiety surrounding the lasting physical effects of radiation after the bombings of Hiroshima and Nagasaki no doubt helped give birth to super-sized monsters like Godzilla, Mothra, Ghidorah, and Rodan, and the advent of these monsters brought about the creation of characters to combat them. Hence the emergence of pop-culture heroes like Ultraman, Kamen Rider, and Kikaida.

After the war, the United States closely monitored the types of industries allowed to revive in Japan. The toy industry was one of the first to be enabled to reinvent itself, and the kaiju films and television shows helped fuel it. Additionally, the toy industry helped stimulate Japan’s economy during the early postwar reconstruction period. These new artistic and economic factors fused with kaiju and hero characters to set the stage for a golden age of Japanese popular culture—one that Nagata first became enamored with as a nine-year-old boy.

Nagata’s pursuit of these Japanese toys took him on an unexpected journey that brought new realizations about his cultural identity as an American of Japanese ancestry. As a Sansei (third-generation Japanese American), Nagata once felt removed from his Japanese heritage. After the incarceration experience of the Issei (first generation) and Nisei (second generation), there was an unspoken shedding of openly Japanese cultural practices in America. Proving one’s “Americaness” meant pursuing and embracing a Euro-centric American lifestyle. The children of Nisei were encouraged to follow this path, with only cursory participation in Japanese culture (mostly eating food and celebrating holidays).

Nagata’s story mirrors that of many of his generation, who sought to recover their ethnic heritage and reconnect with their ancestral homelands by studying Japanese, living in Japan as college exchange students, or participating in cultural pursuits such as bon odori dancing and taiko drum ensembles. One of the most accessible sources of a Japanese American connection for youth was through toys and popular culture. It was through this connection that Nagata entered a world that would eventually lead him to explore his cultural roots. Now, we invite you to immerse yourself in the same colorful universe of kaiju and hero toys that inspired one Sansei to delve into his cultural connections.

Joe Crawford wrote this Tuesday April 9th 2019 at 8:43am That was 1 year ago. The Date Leave a comment tags→ drawings giant-robots japan kaiju los-angeles 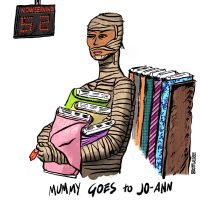 Mummy goes to Joanne
Eric Lawler has a website 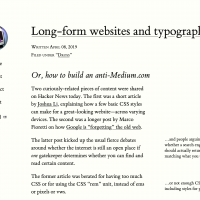