So the 50 minute Stew show yesterday was wonderful. Totally worth the train ride and Dash ride and lack of usable WiFi signals at California Plaza.

I even got to take a few minutes to say hey to Stew. I am such a fan. I actually met him in September last year. I’ve posted some more photos at: Stew at Grand Performances Noon Show. 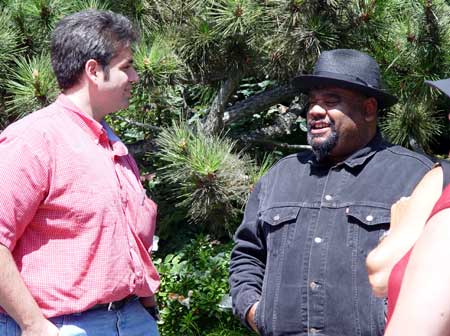 Two new songs worth noting Stew and Heidi played: Black Men Ski and I think the other one was titled Loretta wrote a letter from Baghdad. They also played the first and last pieces of The Drug Suite, I must’ve been high and Arlington Hill.

So glad I went.

Then last night Leah and I went to family dinner and gave some manga to my cousin for his birthday. We were real late but it was cool.

Leah listened to the iPod while on the train and did some freelance anthropology. I wrote some postcards, played with MacStumbler (when are we gonna get onboard Wifi for trains?). Oh, I also did some reading of my local copy of Dive Into Python.

As I type this I’m playing some music, some Suzanne Vega, and now appropriately, some Stew. Love Is Coming Through The Door comes on, and Leah says “I like this one!”

School starts Monday. I’m excited to get back to it. I did some further accounting on my educational career. I have a real shot at getting in as a transfer student. There’s much more there than I realized. Crazy eh? More on that as it develops. UCSD is still my school of choice — but there are some good schools in the L.A. area as well. So — I’m open to how things play out.

Today chilling out. We have a birthday party to go to today. And another next week. And a dinner party tomorrow night. Our social calendar is full.

So I’m doing some mulling and making decisions. Life is pretty darn good.

los-angeles misc music stew
Joe Crawford posted this 18 years ago.
What else did he post in August 2004?
The Date

Today’s Itinerary
Back To School Sale