Prank I can get behind

Mural of the day… 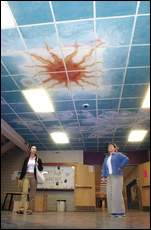 A Montpelier High School senior prank turned out to be as beautiful as it is clever, leaving school administrators uncertain how to react to an uncommissioned large celestial ceiling mural.

The mural, a painting of swirling clouds, stars and a sun in the sky, was apparently done Tuesday morning from midnight to 4 a.m. in the main lobby, Principal Peter Evans said. School administration is unsure how students entered the building, because there appears there was no forced entry.

Evans said when he returned to school on Tuesday after the holiday weekend, he looked up at the mural on the lobby ceiling and thought it was an art class project. He soon learned that it was the Montpelier High School class of 2005’s senior prank, a tradition that has a more troublesome impact on the school. About 170 ceiling tiles were painted, he said.

“In this position we try to figure out how to deal with a case of vandalism that’s really quite beautiful,” Evans said.

In previous years, the departing class took books off of library shelves, piled snow in front of entrances, and even brought a portable toilet into the school, Evans said. This year’s prank is reflective of the graduating class, Evans said, because they are creative and often challenge school administration to think about what is right and wrong.

I love the idea of doing a beautiful piece of grafitti as a prank.

Well, I wouldn’t fault someone for putting ads on their site — even if it’s just a personal blog with Google AdWords on the right. They got some heavy press, and the extra ching probably helps offset the cost of hosting and construction paper.

Also, selling the poster seems a natural fit considering the history of the Yale/Harvard rivalry.

Well, the kids’ prank has tresspassing and vandalism.

It’s just that the vandalism is actually, pretty.

Now, the harvard sucks prank site also has merchandising and advertising, which strikes me as a bit cynical.

If it’s a beautiful piece of art, it doesn’t really seem like that much of a prank then, does it?

Now THIS is a prank.

A Little Behind
Shooting/Simi Valley