Oh, the weekend you say? 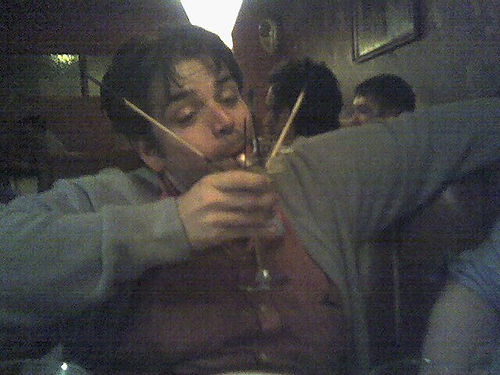 I look like a goofball in this picture. Nonetheless, a grand time was had by all at San Diego’s famous Turf Supper Club last Friday on our little trip to San Diego.

It only took us a few hours to get there from our Simi Valley home.

We took the new van, which runs good. Leah drove, whilst I worked on building a function to convert latitude and longitude in degrees and minutes to a decimal value. The PHP code I hacked together was this:

Not pretty, but it worked well enough on the sample lats and lons I had. This was all so I could get some more data points to work on the 3ones map. Why not just require decimal formats of people? It’s in the spirit of “Postel’s Law” aka the “Robustness Principle: _”be conservative in what you do, be liberal in what you accept from others”_

Anyway, we met M & M at the Club, grilled our own steaks (Matt is a master griller and helped perfect Leah’s steak). We stayed at their place that night and slept there.

Morning brought a great breakfast in La Mesa whose name escapes me now. There’s even an inexplicable short film to show for it. Great chorizo.

Aside: Why can’t I get Soyrizo in Simi Valley?

After we said our farewell to M&M, we went to see my Grandmother, who was in the hospital all last week with various health problems and we were quite worried about. It’s a mixed bag, being close but not too close to my San Diego family. It feels like we can just pop down there anytime, in reality it takes some planning. Were we in San Diego we’d simply drop on in. As it was we had to wait till Saturday. We hope my grandmother continues to recover, she’s getting excellent care from the family, and has some surgeries scheduled in the upcoming weeks. I don’t often reference prayer here, what with me being primarily skeptical and secular, but I’d appreciate any prayers you have on offer for the sick.

After visiting my Grandma, Leah dropped me off at ye olde San Diego Comic Con. Unlike last year, I did not take photos. But I did get in free (yay!). I served as the attendant (read: wheelchair driver) for my pal E.

I was not sure it was possible, but we were able to cover the whole Con floor, which is significantly huge. I”ve been attending cons since I was a teenager, and it is bigger every year.

My usual Con _modus operendi_ is to cover the booths at the con with my own methodology. If you’d like to carry out my method, here are the instructions:

*Method*
Start at the westernmost part of the convention center, and go up and down each aisle of the con. *While doing this* keep your notebook at the ready to mark the “address” of booths which look promising, you can also include a brief note about why it’s promising, like “50% off graphic novels” or “good antique action figures” or “cool t-shirts” There are numerical addresses above each aisle (seen here). This year they were numbered from 100 to 5300. That’s 53 aisles of densely packed comics, movie, gaming, art, movie and other fandom stuff. If you have limited time, taking stock before diving in is a good idea.

Then after running all the different booths and making your marks, you can then go to presentations as much as you want, then between the times there are good presentations being shown, sneak back down to all the addresses you made a note of.

It was a great time for me, though I was a bit tired at the end of Con. I only made two purchases, but I made notes and grabbed schwag from the places that interested me for future online research.

Continues in The Weekend, You Say, Part II.

photos web-programming
Joe Crawford posted this 18 years ago.
What else did he post in July 2005?
The Date 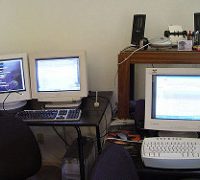 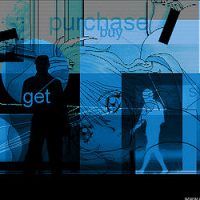