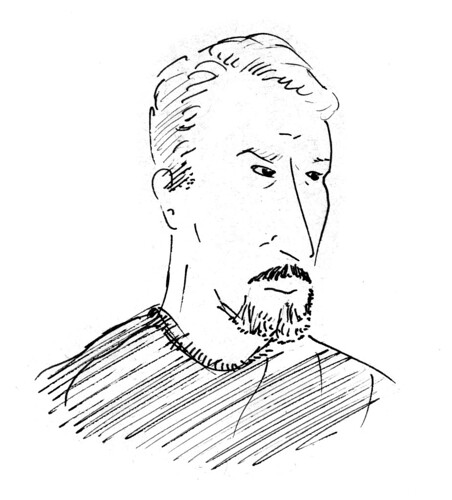 I don’t remember this guy’s name. I would have drawn this on a slow night at California Hospital. He was a midwestern guy, and a supervisor. I think he was primarily a neonatal therapist, though he ended up as a night shift boss.

It’s kind of strange how I got the job there. I interviewed with the head of the department and never heard back. I reached out a few times in the next two weeks to try and contact someone and never got a satisfactory answer.

About 4 weeks later I got a call for a second interview with the night shift supervisor. It was for a noc position, so it was scheduled for about 10:00pm or so. So I took the opportunity to prepare by going to Twoheys for (breakfast? dinner?) [i found a picture of their sign on flickr]. I was still in Orange County so it was a stretch.

Getting the gig at Cal was the thing that allowed me to move out of the OC and into L.A., specifically to Koreatown.

That was a good deal. A big step in my transition to Angeleno. Yeah, that’s what many of L.A.’s denizens call themselves.

It’s funny, I consider myself a San Diegan _and_ an Angeleno. Can I have dual citizenship?

Or are they mutually exclusive?

It’s been a long day. Days off coming up here with family in town. I worked my butt off today on a project for work. Badass HTML and CSS done right and done hard. But I’ve got no energy for anything else. I worked a ten hour day today and let non-regular employment stuff go by the wayside. Tomorrow I catch up.

Now I don’t feel so bad about making less than Sassy!

Every day is a ten hour day in SassyLand! Most are 12!

why is the neon Twohey’s guy crying, and why does he have a closepin on his nose? Do they serve a lot of stuff with onions?

Yes, you can be both is my vote. I too think of myself as a SLOite, even though I’m in San Diego now. We don’t really have a “ian”, unless you call it SLObobian, which I think would make me a slob. It’s late ;).