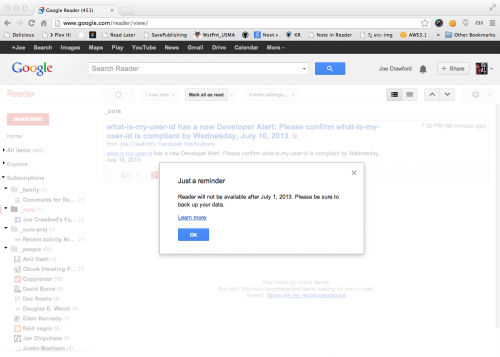 On July 1, Google Reader does indeed close. Reader has been a valuable tool for me for a long time. In 2006, I said:

Holy cow but the new Google Reader is pretty darn good. Fully worth using to read your RSS and Atom feeds.

And that same year, I wrote an extended piece that included how I used Google Reader. Time Time Time; Experts I Treasure is about how I manage my own time, and how useful GReader was to me at the time. Here’s a relevant excerpt:

One thing I’ve done is started reading RSS and Atom feeds again. I use Google Reader to organize and read blogs and anything with syndicated content. This is a great way to keep track of things, but to be “the decider” when it comes to when I look at them. I organize them into categories: ours (blogs leah and I work on or maintain, flickr feeds of ours, etc), people (blogs in a voice more or less by one person), writers.laish (blogs by people in leah’s nascent writer’s group), forsale (craigslist feeds for “for sale” items), group (blogs like metafilter or boingboing, which don’t really have a single person at the helm), jobhunt (feeds for job postings), links (link blogs like waxy’s links and larger link sites like fark), and sandiegobloggers (a holdover which i don’t beat myself up about if i don’t read, there are many). For several months I simply gave up reading blogs or keeping up with feeds, because I was so busy with work, but I ended up even more frustrated because there were people and information sources that I ended up checking anyway, and doing it ad hoc took more time than simply reading them in an RSS reader. I tried bloglines for about a minute. And I had been using NetNewsWire, which is great software, but is not nearly as mobile as I am. When Google Reader got good recently, I jumped in and have not looked back. It’s all very “Web 2.0” of me, I’m sure.

Since December, 2010 I’ve been using Reeder App to read my Google Reader feeds. It has been a tremendously worthwhile purchase at $2.99. Reeder is an excellent frontend to Google Reader. I was using Reeder originally on my Mom’s iPod Touch after she died. Reeder was great. And I’ve been glad it kept working and transferred over when Leah and I got iPhones.

I’m disappointed by Google Reader being shut down. What I’ve done now is install Tiny Tiny RSS on a domain I run and have started, tentatively using it as a replacement for Google Reader. At this point I’ll no longer be able to use Reeder App on my phone. None of the solutions out there appeal to me. Having been burned once now, it’s hard to get behind the other options. What I’m looking for now is to be able to use a service I control as a front end for Reeder App.

RSS is critical infrastructure for the web, and has been for a long time. Some of my favorite projects have been pages powered by RSS. Twitter recently killed all support for RSS or Atom feeds. It’s a horrible disservice they’ve done, but we live in an age where web giants no longer respect inter-operative technologies the way some once did. For depressing reading on this, read Battle for the planet of the APIs by Jeremy Keith.

I’ll leave you with a J.M. Barrie allusion in a tweet I recently tweeted:

Just because nobody believes in RSS doesn't mean RSS is dead. Clap if you believe in RSS!

I still believe in RSS, but we still have work to do to get back the web we lost. 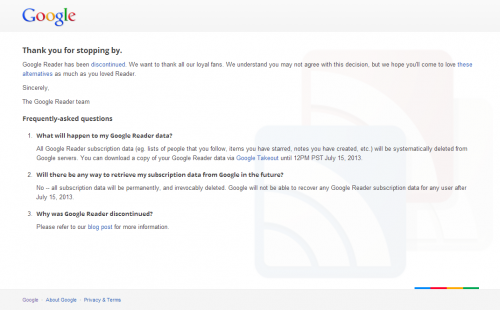 Thank you for stopping by.

Google Reader has been discontinued.
We want to thank all our loyal fans. We understand you may not agree with this decision,
but we hope you’ll come to love these alternatives as much as you
loved Reader.

If you have any interest in what metadata means, please give a read to Ethan Zuckerman’s piece Me and my metadata – thoughts on online surveillance. It gives context to what it means when security agencies are collecting metadata. Everywhere we go in this modern age, we’re leaving digital trails. Off the top of my head, the trails I leave are:

What does it mean? What are my rights? Do I have any? As a longtime blogger, and “moblogger” as we used to call it in the form of Foursquare and Twitter, I essentially have lived out in the open 15 years. I went on the radio in 2002 to talk about “blogging” and talked about some of this then. I have had the same public phone number available on my website for about 10 years.

I’m amazed at what mining my email for a few minutes can produce in terms of the relationships I have. Immersion did this in like 4 minutes. This is just my email metadata. 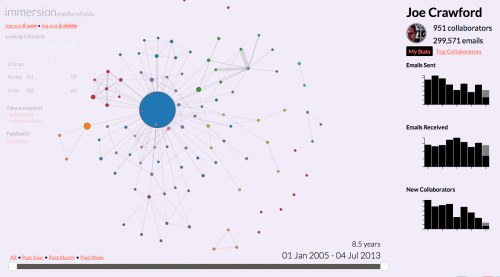 I imagine that given a large corpus of metadata, from many disparate persons, a great deal more could be visualized. What might be shown.

Then the larger question is – who cares? Who would go to the trouble to look at these graphs to try and learn something about me?

There’s a wonderful piece from last month called Using Metadata to Find Paul Revere. It imagines a British Intelligence service to examine the clubs of the Pre-Revolutionary era and finding Paul Revere significant — because of metadata analysis. Particularly relevant here on July 4th.

It’s a strange time. All this is changing how we see each other, and government, and business.

We must sort out what rights and responsibilities we have now that we have these capabilities in our computers.

I’m into female vocalists, rock, pop, indie and electronic, including:

Check out my music taste: http://www.last.fm/user/artlung