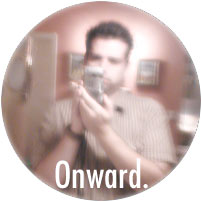 Observations on Flying Across The Country

Morning flights are tolerable if the person who’s taking you to the airport is not tense. I got a ride from my girlfriend this morning and that went very nicely. But as a rule, I prefer to fly later in the day. You see, I’m a last-minute packer and tend to stay up too late before a morning flight. This does help me sleep during the ride though. But today, got to bed at midnight, up at 5am.

At about 6am, San Diego traffic is pretty low-key. Mind you, this is not an indication that I want to be on the road everyday at 6am.

On a long (say, longer than 3 hours) I much prefer to sleep most of the flight.

I despise the bulkhead seats. They do not afford a location for my backpack and other crud. I appreciate having an “under the seat in front of you” spot. As in George Carlin’s famous bit, I need “a place for my stuff.”

Airline food is not really getting worse, but it is getting odder. I was on a morning flight today, so the meal was breakfast. The choices were pancakes or omelet. I opted for the omelet. But I think the cheese inside was actually Cheez-Wiz, or perhaps non-spicy nacho cheese. And it wasn’t so much cooked all together, like an omelet. I think the cooking methodology was to make a thick crepe (1 1/2 eggs I think) and then ladle in 1/3 cup of gooey Cheez-Wiz. Then fold over. Summary: Lame.

Travel in the continental U.S. in 2002 brings one nose-to-nose with new Federalized Airport Security Personnel. The San Diego folks seemed to know what they were doing. I suppose I feel safer, but I can’t help but feel that the “random” searches just prior to boarding are busywork. The rationale for the searches on my flight was that “the security screeners need to be kept busy” – so I of course timed my boarding to coincide with someone else getting the “take off your shoes” treatment.

I’m typing this now in the Pittsburgh Airport. I see that here too there are pre-boarding security screeners. Blech. Perhaps I can just say that I “gave at the office.”

I don’t have a connection to the internet now, or I would quote the Bruce Sterling quote about the current state of the airports. His thesis is that by subjecting Americans to ever-increasing levels of screening, security, humiliation (“show your papers and take off your shoes?”) we are slowly instituting a police state in this country. Not all at once, mind you, but incrementally. I think of the frog/boiling water analogy. Put a frog in boiling water and she will jump out immediately. Put a frog in cold water and slowly raise the temperature and the frog does not notice its’ poaching until it is too late.

Joe Crawford posted this 19 years ago.
What else did he post in November 2002?
The Date

For Mac MarkUp Nerds
In Brief