So yesterday Leah and I went and saw Stew at the Adams Ave Street Fair as promised. He was wonderful as always. He also mentiond a little fun fact about having a song on TV tomorrow — which is to say today. So here’s the 411, direct from the Stew camp:

last time we had a song on a teen oriented tv show we got tons of email from adults who just “happened to have the tv on at the time and heard your music” along with alot of folks who “never watch that show but just happened to be watching it that night to see what all the talk was about.” But the best email we got was from someone who said they were watching tv with the sound down and then heard our song…really.

Now you don’t need an excuse for watching such a show. we’ve just given you one. Actually i’ve heard Everwood is a cool show. I don’t watch prime time tv so i dont know but i’ll be watching this monday at 9pm. Word has it that if you dont dig tv you should tune in 45 minutes into the show. we’re on close to the end.

you have been notified.

I’m pretty sure I’ll be outta class by then.

Joe Crawford posted this 18 years ago.
What else did he post in September 2004?
The Date 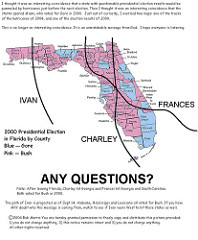 “God vs. Bush?”
Joel on Software: the book! the interview! the dessert topping!