In 1997, I was still working as a Respiratory Therapist. I was working at a hospital in downtown Los Angeles.

So this is an image of a man I was going to be giving a treatment to.

Instead, I discovered the man was not breathing, and was pulseless. He was dead.

I don’t know how long he was dead, but I called a code blue, the code team assembled and tried to revive him, and after we had done those mechanical procedures, he was declared dead and we moved on.

It was not a busy night, so I cleaned up the oxygen equipment and resuscitation bags and miscellaneous respiratory therapy gear. The nurses removed his IV lines and miscellaneous room items. They assembled his personal items for retrieval by next-of-kin.

I took two minutes and drew this dead man on the back of my assignment sheet. A few quick strokes of the pen on a laser printout capturing the last image made of a man.

It’s strange to me to see this drawing, because it takes my mind back to the moment when I found him, and calling the code, and working on him, “breathing” for him.

My work no longer involves coming across dead men in the night, or breathing for them, or comforting the sick.

Sometimes I miss that work, but then sometimes I don’t, either.

It’s a tricky thing to work with death and dying on a day-to-day basis. It’s invigorating, yet draining.

I may not ever work in respiratory therapy ever again, but there is wiring in my brain for doing that job that won’t go away: call the code, check pulse, check respirations, secure the airway, ventilate, begin chest compressions, prepare the chest for shock, shock at 200 joules, check for a pulse…

The wiring may have cobwebs on it, but it’s still there. Some archetypal version of “Clinician Joe” hidden in there.

When I started scanning these drawings I had no idea where it might take me. I certainly never expected to find drawings from work, but the truth is I think I have lots of little drawings from when I worked at the hospital.

So we’ll see where they take me.

drawings memories
Joe Crawford posted this 18 years ago.
What else did he post in June 2005?
The Date 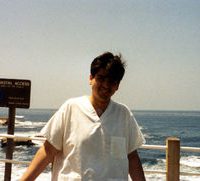