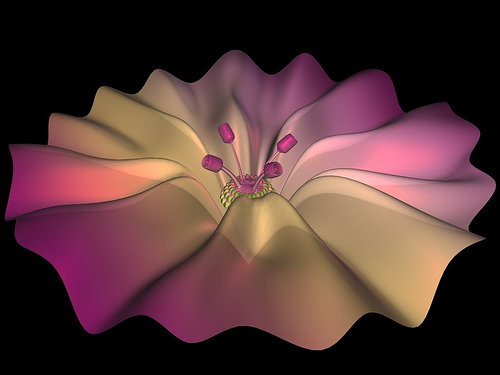 About 10 years ago I dreamed of working in Hollywood. I wanted to direct, of course, but what really fascinated me was postproduction – particularly editing. But also, I loved animation, which meant that I also was fascinated by 3-D animation.

I still have the flyer from the 1987 Festival of Animation — Luxo Jr., though I think I saw it at an earlier showing “The Art of Computer Animation.” I was 16 and 17 years old, tooling around San Diego in a beat up seafoam green 1972 Volvo and these animations inspired me to try and do computer graphics. I vividly remember getting shown raytracing demos at San Diego Amiga User’s Group meetings. These were heady times.

I have a binder with flyers of the animation festivals from this era. Some real classics in there! It looks like earlier than Luxo, I had seen Tuber’s Two Step (which I can’t seem to find online at all, sad!) and “The Adventures of Andre and Wally B.” — both in 1986. I love the description of the rendering of Tuber’s:

Awesome. I bet you never even heard of a VAX. Luxo and Andre were of course the work of John Lasseter at Pixar.

But I never did any actual 3-D art. I never worked in 3-Dimensions. I fiddled with a raytracer for the Amiga at that time but it was all based on little text files — in other words, programming. I could just never figure the stuff out.

Fast forward from 1987 to 1996 and computer graphics were very popular. Terminator 2 had come out several years earlier to accliam for the use of high end graphics and compositing of the morphing terminator. I had moved to California from Virginia and was researching everything I might want to do. I was particularly interested in taking classes at Silicon Studio in Santa Monica. Silicon Studio is no more, but they taught expensive classes in computer animation at a neat facility. It was a branch of the then-flying-high SGI. I went to SIGGRAPH and was blown away. I was reading about CG animation incessantlt, reading movie magazines to try and learn all I could.

All that reading made me book-smart about computer graphics. For some reason NURBS stands out in my memory as something to know about. I had it memorized and even understood what it was. NURBS are “non-uniform rational B-splines.” NURBS are math that describes curves, especially a curve you have to reproduce in a computer with a minimum of math. They’re Bezier curves, which I understood from my class in Freehand/Adobe Illustrator. It was a subclass of the kind of math you would need to represent objects in a virtual world. This virtual world I always thought of as Gibson‘s Cyberspace.

Right now I’m taking a class in 3-D animation. The tool we’re using is Cinema 4D. It’s an impressive tool, and (so far) straightforward to learn. And one of the tools is “HyperNURBS” — I don’t know what the “Hyper” part means yet, but the image in this post is my very first time actually using these NURBS thingies!

So that’s a brief tale of my own personal  experience of 3-D graphics, from fan, to knowledge, and now to application.

That turned out very nicely!

Taking The Fun Out Of Rock
I know nothing