I’ve started reading many more blogs about drawing, illustration, animation, and comics, and I have to mention an artist who quite impressed me, and who I had never heard of. Over at lines and colors, Charley Parker posted about him the other day and it wowed me:

lines and colors: A Little Bit of Leyendecker Greatness
For the benefit of the uninitiated, Joseph Christian Leyendecker was one of the all time greatest illustrators. He is also one of my personal favorites. In my original post about him I tried to convey how flabbergasted I was, and continued to be, at how relatively unknown he remains; particularly when compared to Norman Rockwell, who followed Leyendecker into the role of main cover illustrator for the Post, considered Leyendecker a major influence and a friend, and receives credit that I think belongs to Leyendecker for setting the high-bar on American magazine illustration.

Yes indeed. I suppose because he followed Norman Rockwell he doesn’t get the kind of notoriety Rockwell gets. But clearly he was a talented illustrator. When I was a kid and teenager I dug Norman Rockwell. I dug Warhol too, and Jackson Pollock too, but a good illustrator, despite their subject matter being prosaic can say a great deal. Here’s a detail from a posting to the Leyendecker blog Parker mentions. 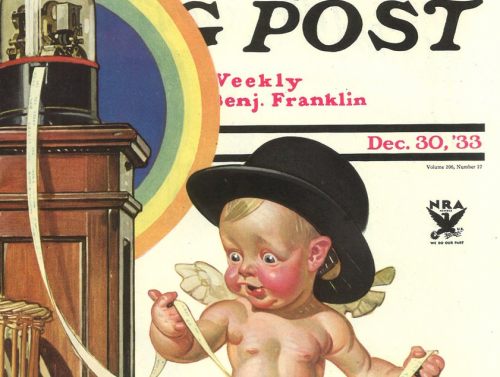 This was in 1933, the depths of the depression. You can see the NRA symbol right on the cover of the Saturday Evening Post. It’s a New Year’s Theme, a wish allegory for a recovery on Wall Street in 1934. I’m not sure why his work hits me, I think it’s a combination of draughtsmanship and showmanship. He revels in these illustrations. They’re fun and detailed and bursting with energy. I’m happy I found them.

For Father’s Day this year I received a set of really nice pens to draw with.

Time’s always the thing, no? Perhaps I’ll find some.

Joe Crawford posted this 14 years ago.
What else did he post in August 2007?
The Date