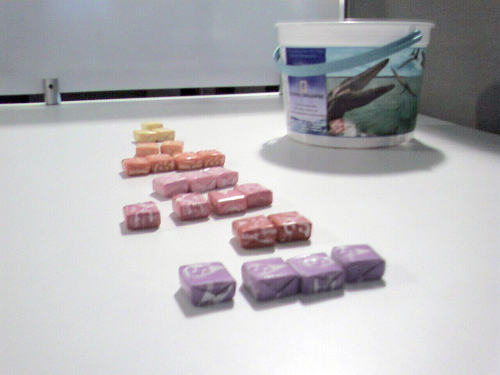 I enjoy having candy at my desk. My co-workers like it too. The lesson on these Starbursts is that the tropical flavored ones have wrappers that look just about the same as the regular ones, but they just don’t taste good enough, and taste too different from the regular that they are surprising in a bad way.

So, no more tropical Starbursts.

In other, more substantial and important news, Leah and I found a rental on the other side of town — I think we’re finally going to have the space we need for the family. We’re in a 3 bedroom duplex and we’ll be moving — assuming we get it — into a 4 bedroom house with a nice back yard and a little deck and some view. Cross your fingers that the credit checks and background checks and whatnot go well. We really like the realty guy we’re dealing with — straight shooter, go-getter, and several other peppy terms apply to him. Dropped off the paperwork to him on Monday.

So how’d we do it? On Saturday we drove around where we want to live, every street, every cul-de-sac, looking for signs. The ones on craigslist and online typically have folks interested already. I drive around as safely and quickly as possible, up every street, keeping track of where we’ve been and basically “learning the map” as though I were starting a level in a first-person shooter. Leah is my RIO (that stands for Radar Intercept Officer) and we look for signs and symptoms of rentals and leases. We look at all the signs. Sometimes it’s just a “this house was just painted by Acme Painting Co.” — and usually it’s “this house is for sale” — but sometimes it’s a “for rent” or “for lease” sign. And that’s what we wanted. So we did that for about 3 hours Saturday morning and got 5 great leads, including three I know have not shown up online. It was a great, productive morning.

Later on we drove down the coast from Oxnard to Malibu. It was a beautiful drive, and we kept our eyes out for people in the water without wetsuits. The water temperature is still in the fifties — but Spring Break brings out the bathers and I just might be crazy enough to go into the water at that temperature. Summer can’t come fast enough as far as I’m concerned.

Later on, we had lunch and saw paparazzi, as Leah chronicled.

Easter was chilled out without the kids around, but in a good way. We’re looking forward to them getting back from their trip with their dad.

photos
Joe Crawford posted this 15 years ago.
What else did he post in March 2008?
The Date