One of the things we do at work, at lunch and otherwise, is talk about movies, old, new and forthcoming. We kibitz and argue and I get a lot out of it. I like talking about movies about people who care about them.

The one movie I am excited about that NOBODY else is is Speed Racer. I think it’s incredible looking. I suspect it’s going to massively flop, but I hope not. It reminds me a little bit of Warren Beatty’s Dick Tracy–which I find to be awful, but was an interesting experiment. My hope is that Speed Racer will be more than just interesting.

I enjoyed Iron Man very much, despite being very sick when I saw it. I juiced myself up on cold medicine, grabbed a handful of cough drops and we saw it last weekend. I followed the Iron Man comic in the 1980s so I do have longstanding (holy cow, 20 years) interest in the character. I thought the casting was great, and the movie was fun. Good action, believable characterizations: the film worked. I think criticisms like those voiced by Matthew Baldwin are valid, and I think his superhero movie pet peeves are particularly apt. 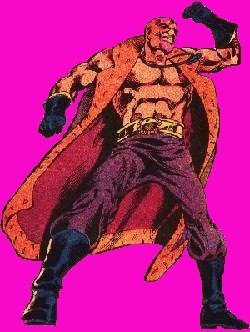 I think Lebowski might’ve looked pretty good in that! Well, maybe. I’m curious to see how the sequels might do. Oh, and one last AWTC post: Iron Man 2 Villain Suggestions. And though that is a funny post, Black Lama really is a character who is “other-dimensional counterpart of Gerald Ford,” Wikipedia confirms this.

The other two “big” movies I want to see this year are Wall-E and The Dark Knight. I’ve been a fan of Pixar animation for decades, and a Batman fan even longer.

Speaking of animation, I would be remiss if I did not bring to your attention a Bollywood/Disney computer animated film called Roadside Romeo, which I found via Cartoon Brew:

It looks truly bad, though I will admit that I’m not the intended audience. It does include a heaping dose of ‘tude. Though John Kricfalusi does not care for the Simpson’s, when I think of ‘tude, I think of Poochie.

Joe Crawford wrote this Saturday May 10th 2008 at 10:25am That was 13 years ago. The Date 2 comments tags→ animation comics illustration movies