In 1988 I, along with my pal Chris Greazel, saw William Gibson read at a bookstore in La Jolla, above La Jolla Cove. It was intimate, maybe two dozen people in the audience. We had a great time, and it felt like we’d had an audience with the pope. I’m not sure why it was that we were so compelled by science fiction, but we lived and breathed the thing that excited our brains more than anything else. Well, maybe we pined for women more, but we had no hope there, so what we had was design, futurism, Blade Runner, and especially Cyberpunk.

A few months ago Leah and I went to Pasadena and watched William Gibson give a short reading from Spook Country, his latest book, and now in paperback.

Here’s a blurry photo in which Mr. Gibson is a small smudge in the lower right corner: 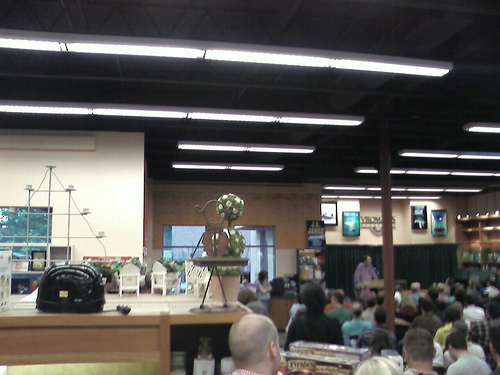 William Gibson still inspires me, but it’s a measure of my ability to sustain my priorities that I did not pick up Spook Country in hardback, and will get to it in paperback eventually. My eyes are on different goals. Fiction ends up taking a back seat to autiobiography.

cyberpunk william-gibson
Joe Crawford posted this 14 years ago.
What else did he post in July 2008?
The Date

On The Money Front
Two from the ride from the airport 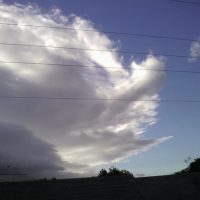