Last night I attended a meetup about Drupal in Santa Barbara. I had wondered whether this was something that would be worthwhile to drive to, considering the distance. Turned out it was no further than a drive down to Los Angeles for a meeting, which I’m more than happy to do when something interests me. It was an hour and a half drive, and that includes time getting gas. I’m very appreciating to Markus Sandy‘s twitter stream, that’s how I found out about it.

I learned a lot. I think I’m getting a much better high-level understanding of the strengths, weaknesses, and peculiarities of Drupal. It started some time back with some Drupal, and I’m thankful to my last job for getting me some more in-depth experience. I also learned a lot from DrupalCampLA.

Markus has already blogged about it!

Also, in terms of drupal, it’s all about the modules. Some modules that I want to check on (or refresh my memory of) are: cck, project, project_issue, book, blogapi, jstools, notifications, ubercart, word2web. We also talked about some of the history between Drupal and Acquia and the relationship between them, which I found quite helpful. We also discussed the perennial issue: WYSIWYG edititors and their incredible promise but sad lack of performance: FCKEditor, TinyMCE, TinyTinyMCE, and YUI Rich Text Editor.

I’m happy to have met the folks last night, it was an interesting group with varied backgrounds. I got a lot out of it and will be looking more seriously at Drupal and other groups that meet in Santa Barbara. “Worth the trip” is how I look at it.

Update: Markus has compiled a short video of the event

drupal santa-barbara webdev
Joe Crawford posted this 14 years ago.
What else did he post in November 2008?
The Date 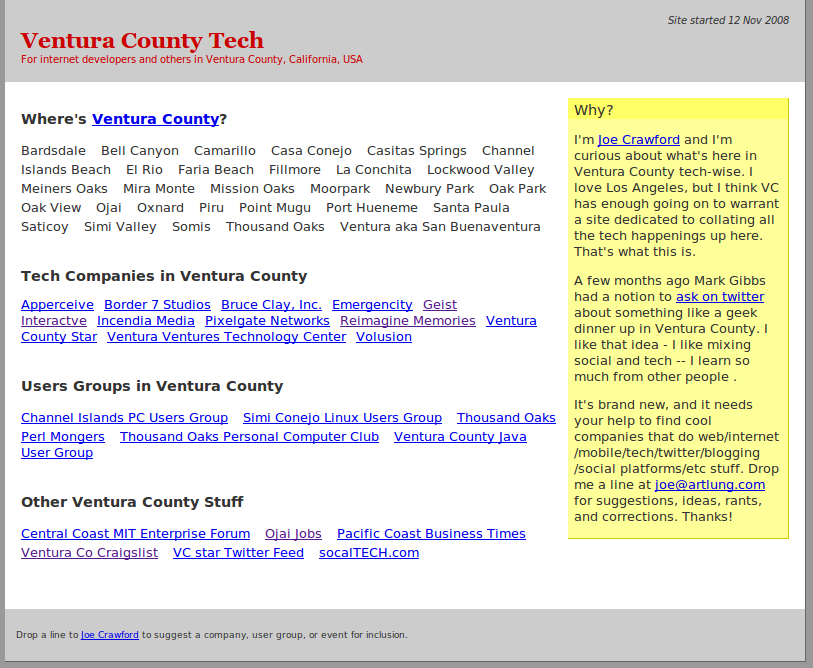