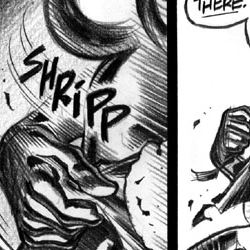 I love Adam Warren’s work so much. His comic Empowered comic manages to be satirical and yet dramatic, ridiculous and yet science fictional and superheroic. He also has a penchant for cyberpunk and pop culture, which is wonderful. Quote of the day is from him on sound effects, contemplating his work on Empowered Volume 2, Page 56:

Note that I always use “SHRIPP” for a sound effect when Emp’s suit tears—and never something like “RIPP,” which to me veers dangerously close to a literalistic sound FX like “RIP.” I have an overwhelming and not entirely explicable antipathy for literal, concept-based sound FX like “LEAP!” or “POINT!”—even in a theoretically humorous basis. This might be because I was rubbed wrong by early parodies of manga that leaned heavily on the misbegotten, misguided joke of “LEAP!” and its ilk, which completely miss the point that manga sound FX are, in fact, sound FX and not conceptual in nature. That is, we’re “hearing” a phonetic katakana approximation of the noise made by someone leaping—akin to the sound FX “THAPP” I often use for someone launching off the ground—and not a g-d kanji character representing the concept of a leap. Note also that the crappy exclamation point in “LEAP!” adds a crappy cherry on top of the crappy sundae, as I also despise punctuation in sound FX with the fire of a thousand suns.

If this is of interest, DEFINITELY you should check out empoweredcomic.com where he’s posting pages of his comics and his thoughts on those pages – his regrets, thoughts on process. It’s really moving to see someone work so hard. I’m still kicking myself that I decided I could not afford a commission from him in 2015 at San Diego Comic-Con. He’s great.

adam warren comics empowered sound
Joe Crawford posted this 6 years ago.
What else did he post in August 2016?
The Date

Oh look I’m posting and old
Halloween. The past. Me with Gene Simmons makeup, a cape & white flat cap (?) and my little sister as the cutest Wonder Woman ever. 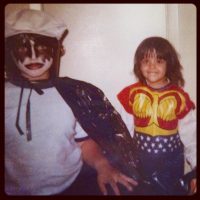